Behind the Photo: Frozen

In the Behind the photo series, I want to go into more detail on why and how I took a particular photo. For this weeks story, I’ve chosen one of my favorite images taken by me in the Netherlands. It is the image I took right after the total lunar eclipse on the 21st of January this year. This story is about motivating yourself to go out even when you don’t feel like it. You’ll never know what you will come home with, and when you take that amazing image, it will be so much more rewarding! 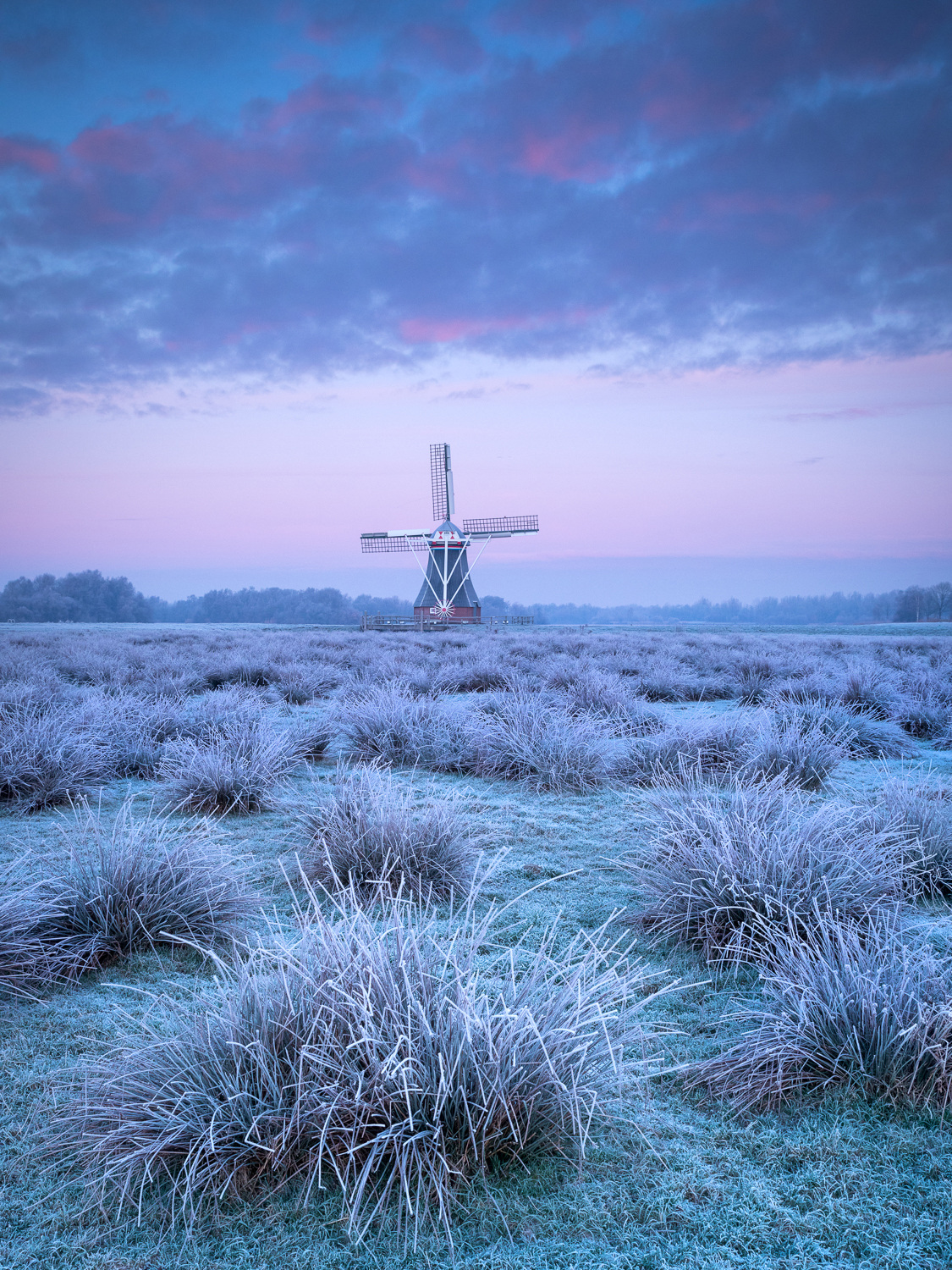 The night of the lunar eclipse was cold and crisp. Even though I had been reluctant to go (I had been ill for the first time in years, and was still recovering), my girlfriend convinced me to go anyway. There were a few factors that made me doubt whether it was going to be worth it. I had envisioned an image where the moon would be close to the horizon, but it was way to high in the sky. In the days before, I’d visited different locations, used Photopills and other software to determine the location and elevation of the moon.

This all set aside, I got out of bed at 5.00 am, made coffee and jumped in the car. The moon was blood red, it looked insane but on the other hand, it was still more than 20 degrees above the horizon. Doubting whether I would return with something useful, I drove to my location. There were quite a lot of cars on the road already, people were slowly starting their workday. I was wondering how many of those people would actually notice the odd color of the moon. Would they gaze in wonder or be oblivious about what was happening?

After I reached my location, I parked the car alongside the narrow road. Crossed a fence and walked into a field. I had determined that to get the moon above the mill, I had to be in this field. In contrast to the busy ring-road, overhere the world was still asleep. I always enjoy breathing in the cool air, but even more so now. It felt like the dry air was healing my lungs even faster (I still had bronchitis and sinusitis). When unpacking, I noticed that I had forgotten my Natural Night filter but couldn’t be bothered, regardless of being close to the city the light-pollution was manageable and I knew I could easily fix that in post processing.

Because it was pretty dark, I knew I had to take multiple exposures and blend them together to get any detail in the foreground. I tried different settings and determined that 30 seconds worked best to get enough detail but avoid making it look unnatural. Now it was time to photograph the moon. I wanted to get a moon-burst, which means that the bright part of the moon will form a star. But of course, I also wanted to show the details in the parts that were still in Earth’s shadow. Therefore I photographed the moon in different exposure times. I was excited to see that a cloud moved in between the moon and the mill, that was the extra element the image needed. In my opinion, this cloud balances the distance between the moon and the mill. 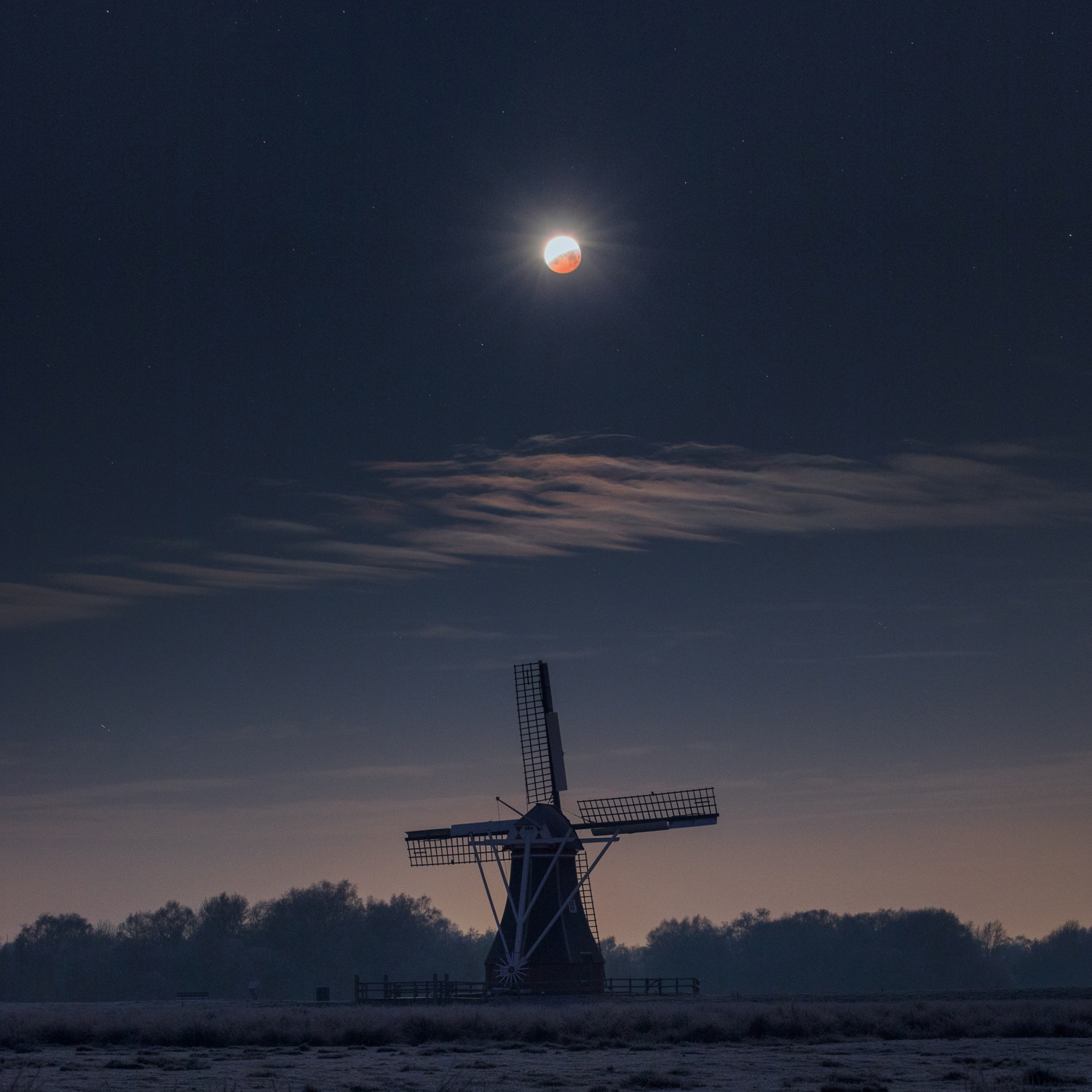 After I had taken this image, I was starting to enjoy myself even more. Next to the lunar eclipse, the moon was a supermoon being 6% larger than normal. To capture its size, I waited for the moon to sink much lower towards the horizon, and next to the windmill. Now it started to get light and colors were starting to appear. We were getting into early blue hour. The moon was bright yellow and super large. It contrasts really well with the dark mill and the cold tones. 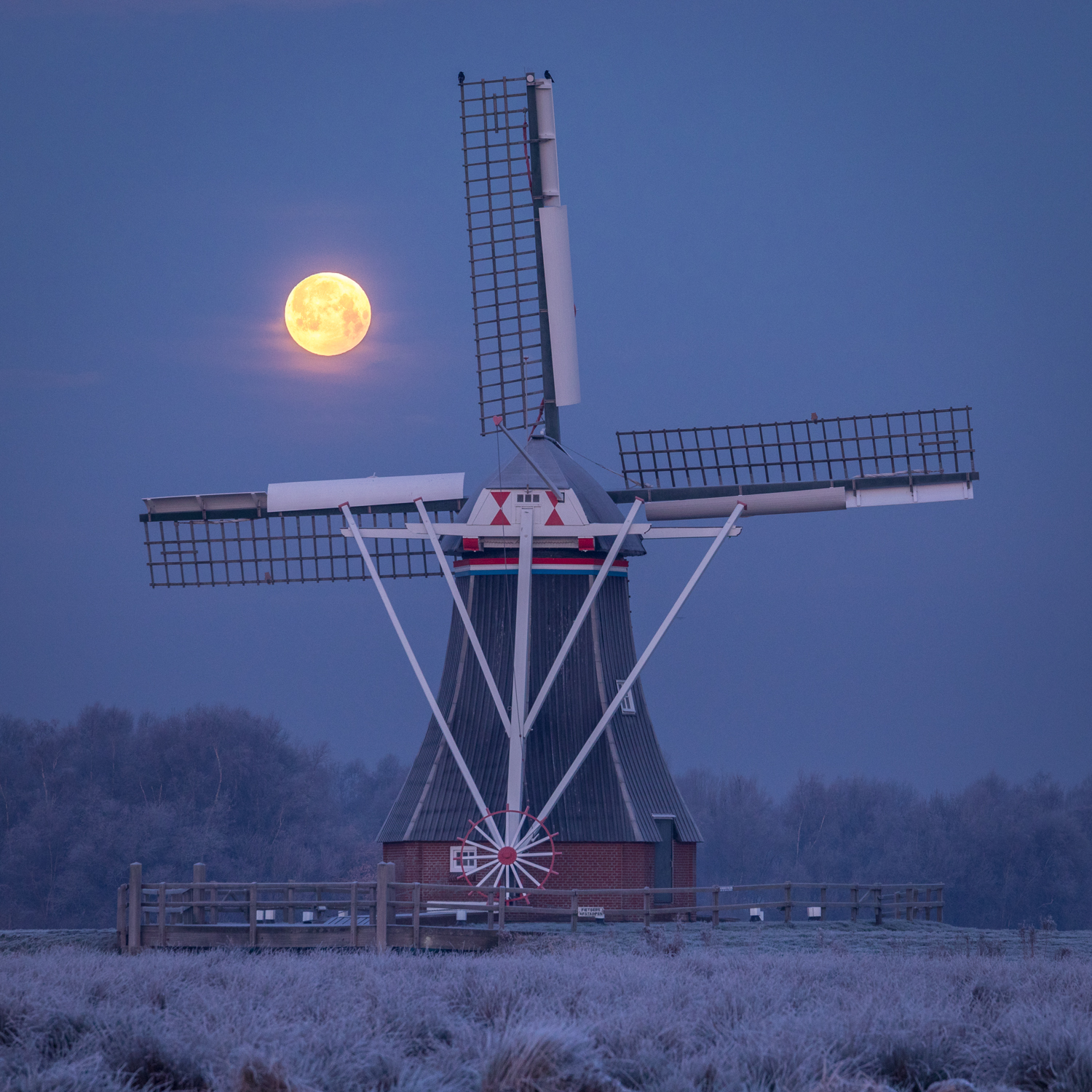 The moon was now speeding towards the horizon and opposite to it, the sun was about to rise. Clouds were moving in and I knew that something special was about to happen. I could sense the colors starting to change. One of the reasons I love winter so much, is the exceptional pastel morning light. Both the grasses and ground were covered with a beautiful frosty layer.

As the sun was about to rise, colors in the sky started to appear. Now I had to act quickly because this wouldn’t last long. Once the sun was above the horizon, the colors would be gone. There was only one problem, to get the right composition, with the grasses in the foreground, I either had to cross a drainage channel, or walk all the way back and around. I knew the latter was no option, I would never make it in time. Therefore I tried my luck with the ice (it only had been freezing the last couple of days). I pushed my tripod to the other side. A bit further away, I slowly moved across the ice. It was about 3 cm and supported my weight.

I composed the image with the one prominent bundle of grass on the left corner and the mill slightly off-center. Because I was close to the grass, I focus-stacked the image. To balance out the foreground with the sky, I used a NiSi medium edge graduated filter. In literally less than a minute, the sun rose above the horizon and the pastel colors were gone.

When in doubt, Go!

With this story, I want to emphasize that when in doubt, you should go anyway. Every time you get out into the field, you learn something. Sometimes you will get home empty handed but that is ok too. No moment in nature is a moment wasted. This time, I was lucky to get away with 3 shots of which 2 are decent and one I really love. These results however, stands opposite to the countless occasions on which I returned empty handed. This is all part of the process. If you want to learn and improve, you need to be in the field, and you need to accept and embrace failure.