Autumn on the Lofoten

After waiting for half a year, it was finally time to return to the amazing Lofoten archipelago again! This time in autumn, for my autumn tour. It promised to be a trip full of colors, dramatic skies, storms, big waves, heavy rain, rainbows, and, last but not least, intense light. Though challenging, in my opinion the perfect ingredients for an epic tour.

In this post, I will share some behind the scenes images and videos (shot with my smart phone) to give you an idea of what this week was like! 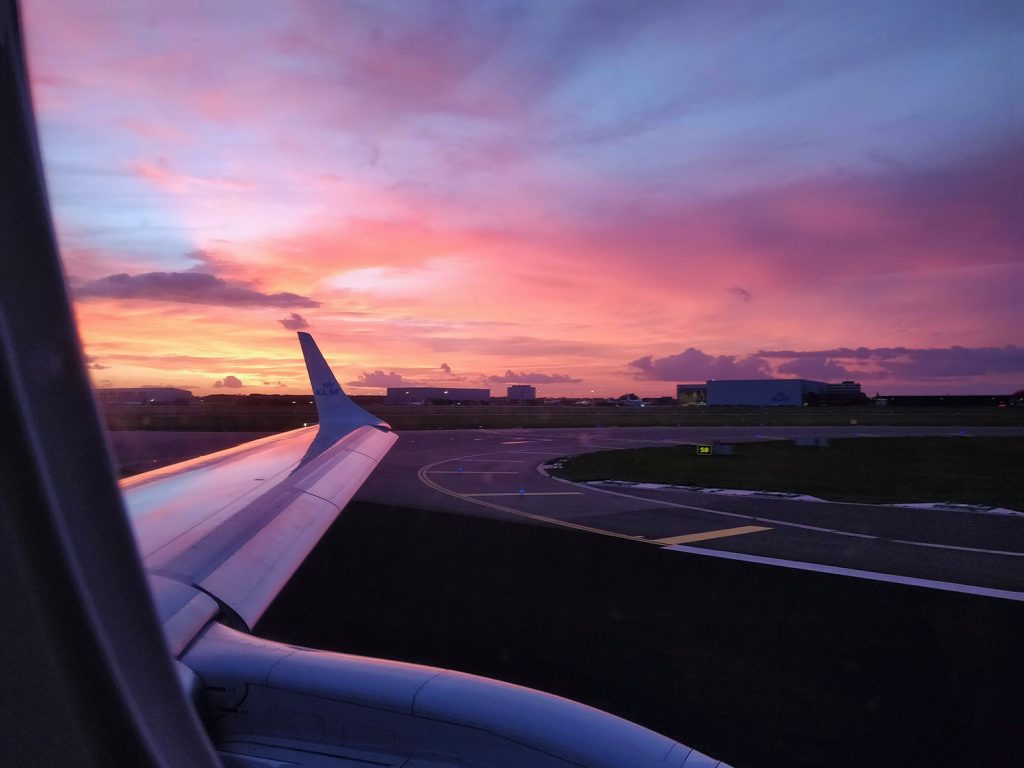 After a cancelled flight the day before, we set off on our adventure at sunrise…And what a sunrise it was!

I always plan my journey a few days before the actual tour starts. Mainly to do some hiking, exploring, getting settled and meeting with friends, but this time it proved to be important as well. Because of a big storm passing the Netherlands, our flight was cancelled, the only option was to fly the next day. With the remnants of this storm still in the northern sky, I expected the flight to be pretty bumpy, but this wasn’t the case so the journey was calm and pleasant. 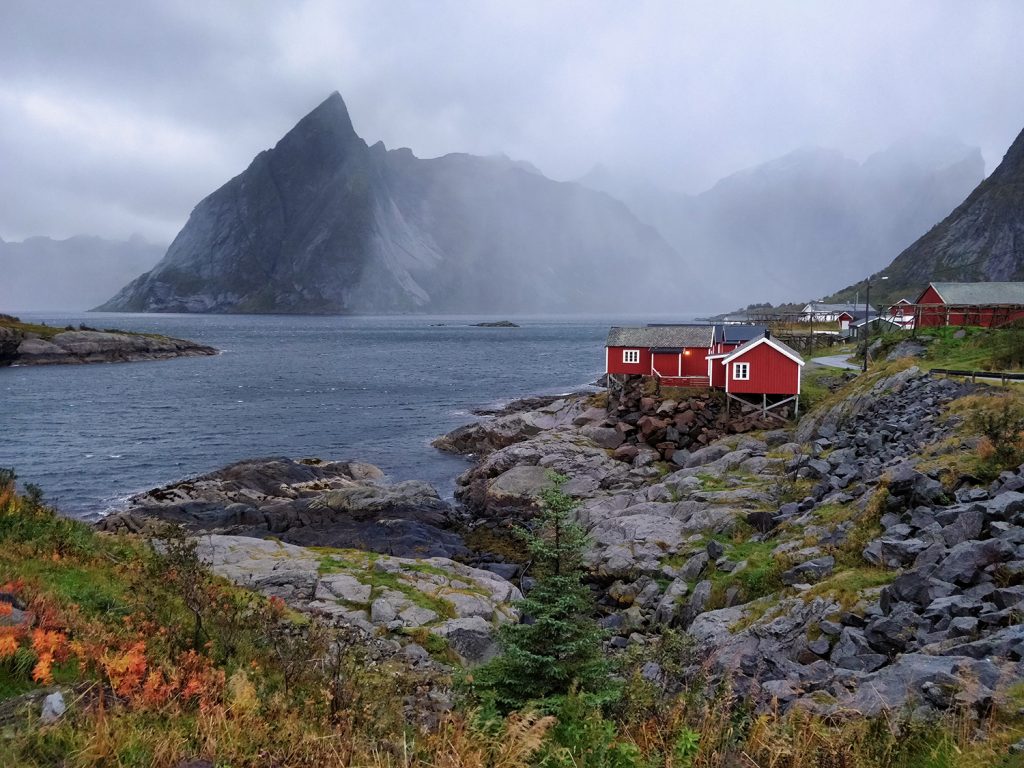 Heavy rain, epic clouds and sunshine followed each other in quick succesion.

After having landed at the Leknes airport, and some grocery shopping, it was time to head to the guesthouse in Reine. Here I checked the weather forecast and it became clear that it was going to be rough and changeable for the whole week. That ment a lot of drama and clouds. Perfect for autumn photography if you ask me! Apart from ecstatic reasons, this type of weather has a major advantage to clear skies. When there are so many clouds and the weather changes this quick, it doesn’t really matter what time of day you are out to photograph. As a matter of fact, you can (and should) be out all day. Thanks to the clouds, the light is almost never too harsh (it sometimes can be a bit dull though) but when the sun does appear, chances for rainbows are big! This means that you will be able to photograph a rainbow at one of the classic spots if you are lucky (and patient) and plan your shoot accordingly. 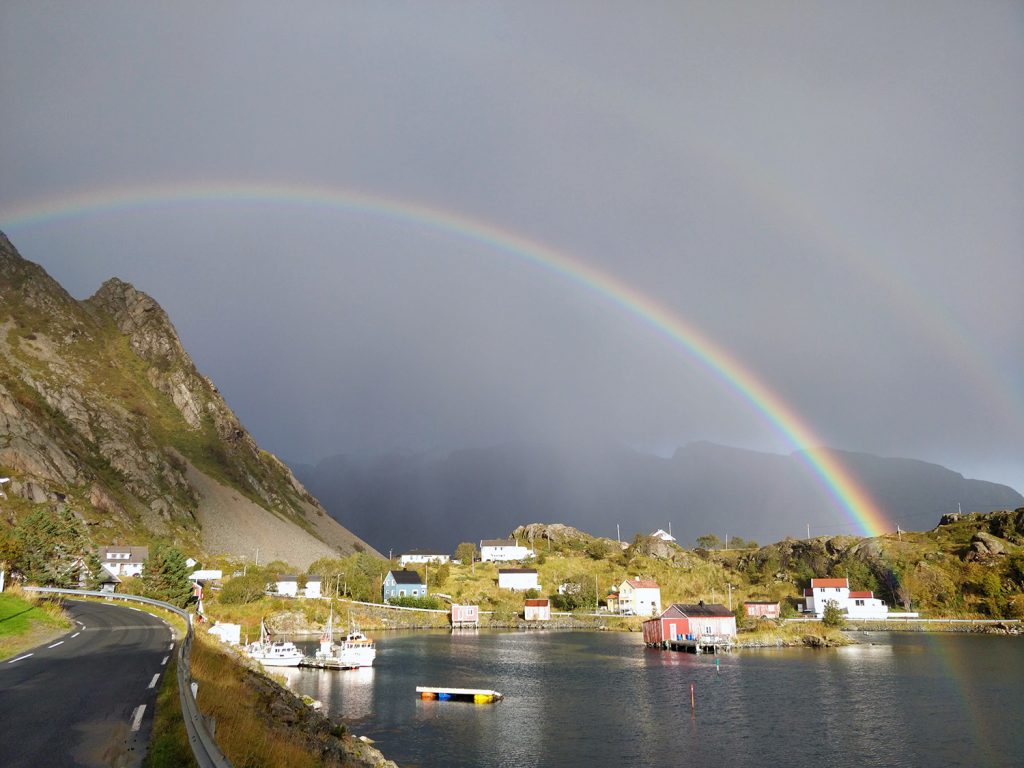 One of the many rainbows we saw! Unfortunately, with this one we were not at the right place to photograph. Still really enjoyable though!

One day before the tour, I went out with my friend and fellow photographer Steven Henriksen. This was a lot of fun, but we also had to work really hard for our images. It was raining like crazy and there was so much drama in the sky. Thanks to this rain, there were waterfalls everywhere. It looked really cool! I had an image in mind which required a shutter speed of around half a second and also the right timing to get a nice retracting wave (who thinks of something likes this with this type of weather). I was hoping that the bridge would offer some shelter, but it only made matters worse. Water from the bridge was dumped on our heads now and then (depending on the wind). It took over one hour to get 6 exposures, of which the last one was the image I was hoping for (which is the title image for this blogpost). 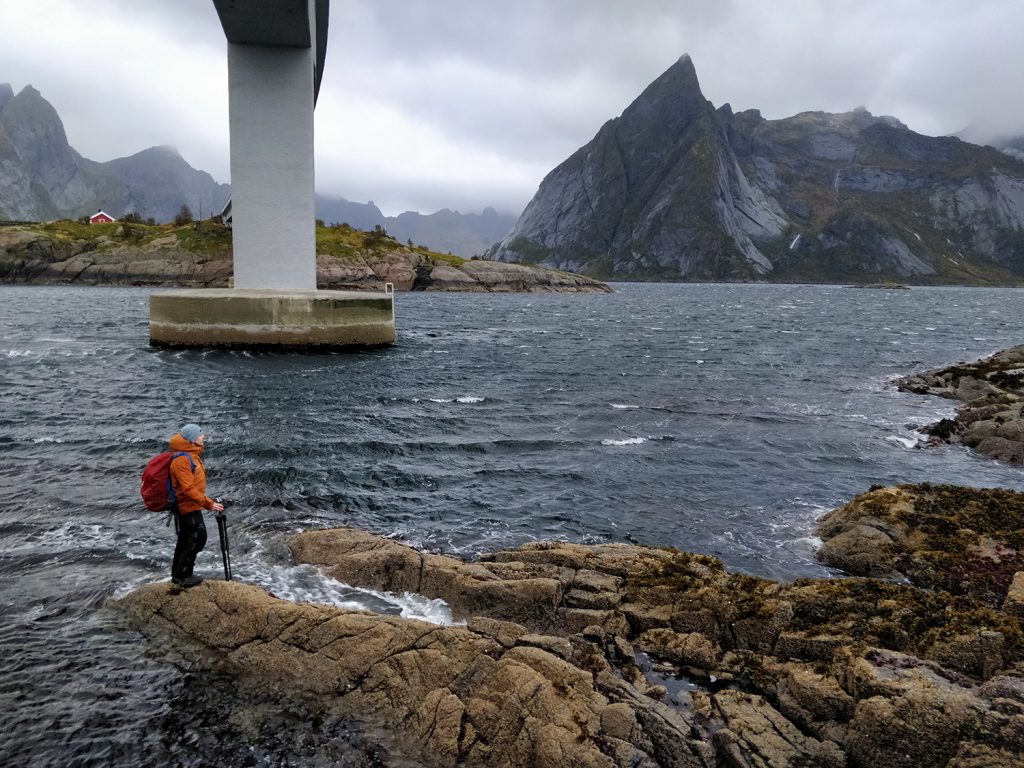 Steven is looking for compositions while waiting for the rain to pass.

On the first day of the tour, we got some of the most amazing and intense light I have ever seen at this place and I shot one of my best images to date. We also got a crazy rainstorm but that was when we were still inside of the house luckily. This intense light happened just after a big shower at one of my favorite locations overlooking the Reinefjord. Already on location, rain was dumped on our heads but we could clearly see an opening at the horizon. As this developed, yellow light started to warm the whole mountain range across the horizon. To give you an idea of this, I made a short video clip. I was planning on making a proper video but the heavy wind made this impossible. Sorry for the noise and the shaky-ness 😀

The second day had everything in store. We began with dark skies and heavy winds, followed by sun, more wind and big waves. Thanks to the dark skies the colors of the houses and the trees really popped. We used this in our favor. The only thing you had to take into account were the strong and sudden gusts of wind. This made it impossible to leave the tripod on its own. But thanks to the sun, the colors popped even more. We went to a lot of different locations making good use of the day. We ended with beautiful sunlight at the beach, while waves were crashing against the rocks in front of us. 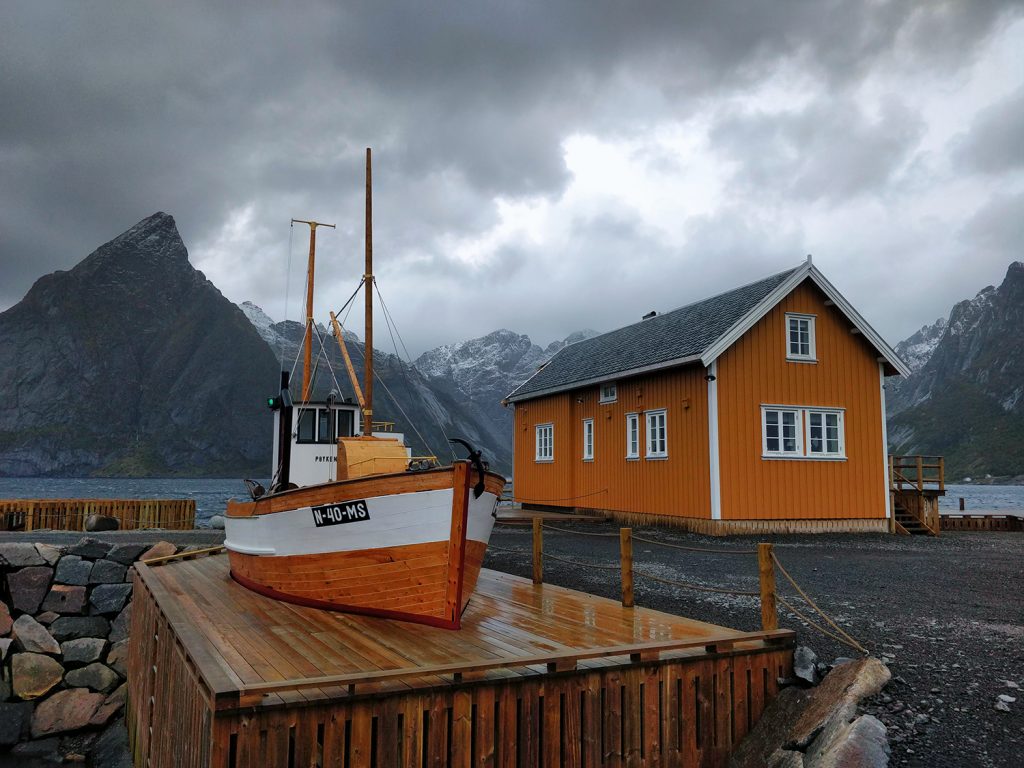 The bright colors popped against the dark and moody landscape.

Day three started at one of the large waterfalls that, thanks to all this rain, had grown largely in size. The whole area was vibrant in color and the amount of water that was coming down made it a perfect place for some beautiful long exposure images. The landscape offered both detail images and grand vistas. A really nice and inspiring place to start the day. Now and then, a big shower passed but there was also a lot of sun. This could only mean one thing: Rainbows! The idea was to try and shoot a rainbow at one of the classic photo locations. The first rainbow appeared at the wrong place so we had to wait for another shower to pass. Waiting on the bridge we could see a large shower appear, while at the opposite side, a large gap in the clouds uncovered the sun. As this happened a big rainbow developed and slowly moved into the right position. Waiting for this was quite intense, to say the least. Of course everything was ready so when the rainbow was at the right spot, the image was quickly taken. The strength of the rainbow even intensified after which it disappeared again. 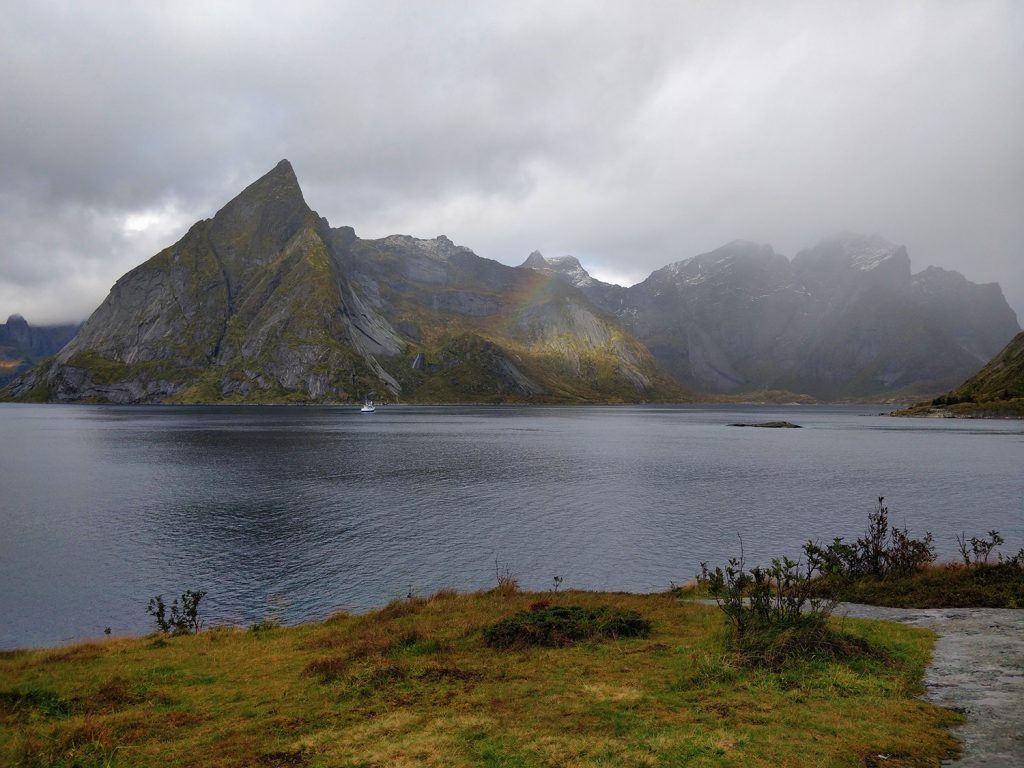 The first rainbow appeared at the wrong spot and the shower wasn’t fast enough the keep up with the gap in the clouds on the opposite side.

Stoked about what happened we continued our journey to one of the far away beaches but when we arrived the light was dull and flat so we left soon thereafter. Back in the car, I received a warning that a severe storm was underway. I checked the wind charts and saw that within half an hour the wind would pick up to a speed of up to 100 km/h, with gusts reaching 140! As this developed we could see the sea getting angrier. This looked spectacular. Just as the storm neared its peak, we found a place to park the car and enjoy the spectacle. Here, the wind was forced through a channel, making the gusts even stronger than at the beach.

On day four we went back to the same beach as the day before. This time the light was much better and we spend the whole morning shooting rocks, pools, retracting water and other beautiful seascapes. The sky offered different types of clouds. Big fluffy ones, and dark grey ones. The first worked really well with long exposure shots, where as the latter worked well with rockpools. When you are photographing at the beach and it is upcoming tide, always keep attention to where you place your bag. The water rises quicker than you think, and it would be a shame if your gear floats past because you are concentrating on getting your shot. This is something I always tell my participants too! 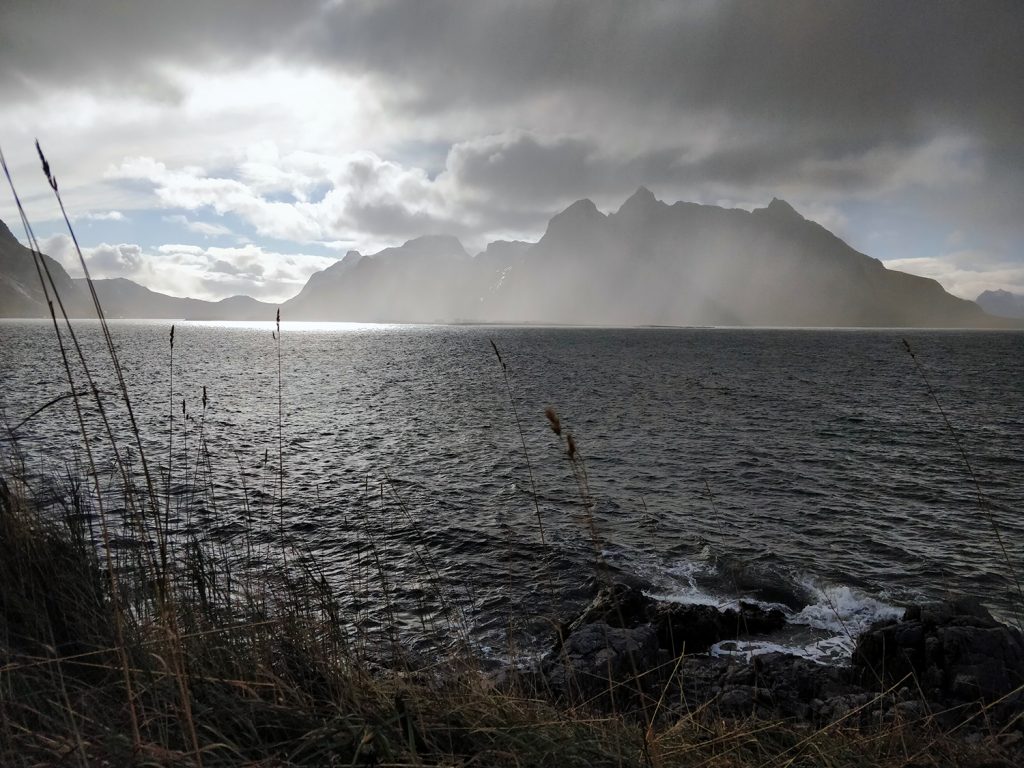 With weather like this, crazy skies and epic light are guaranteed!

On day five we went to one of my favorite little islands. It is quite a long drive to get there but the road is beautiful and offeres a lot of opportunities for some nice photos. This day the weather was beautiful and the forecast promised that it would even be better around sunset. The many lakes, fjords, mountains and villages offered beautiful scenes. The sun made the autumn colors pop and the hours before sunset were really nice too. The sunset itself was rather boring but that wasn’t such a problem after this beautiful day. 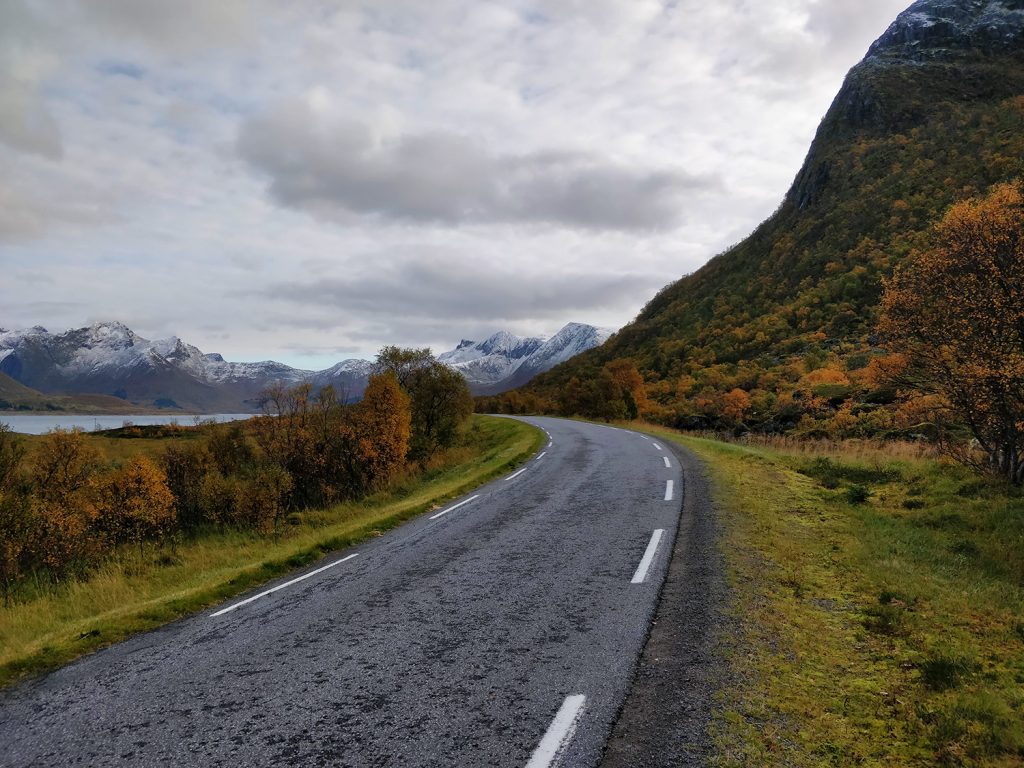 This place s a photographers dream! Mountains with snow, amazing autumn colors, thick moving clouds and nobody else around!

The forecast for day six looked really bad, rain and an overcast sky for the whole day. After being washed away from the beach, we decided to drive a bit further. The Lofoten masters surf competition was about to start so maybe we were able to snap a few images over there. As we neared the location where the competition was held, the sky started to break open. This of course came as a surprise. Because the wind was coming from the North-West (which in this part of the world means from the North pole) the mountain tops were covered with a nice layer of snow. This, in combination with the autumn colors, looked epic. Therefore we decided to leave the surf contest to photograph this instead. The area we were offered some really nice compositions to work with! So eventually this day wasn’t lost as the forecast had suggested. 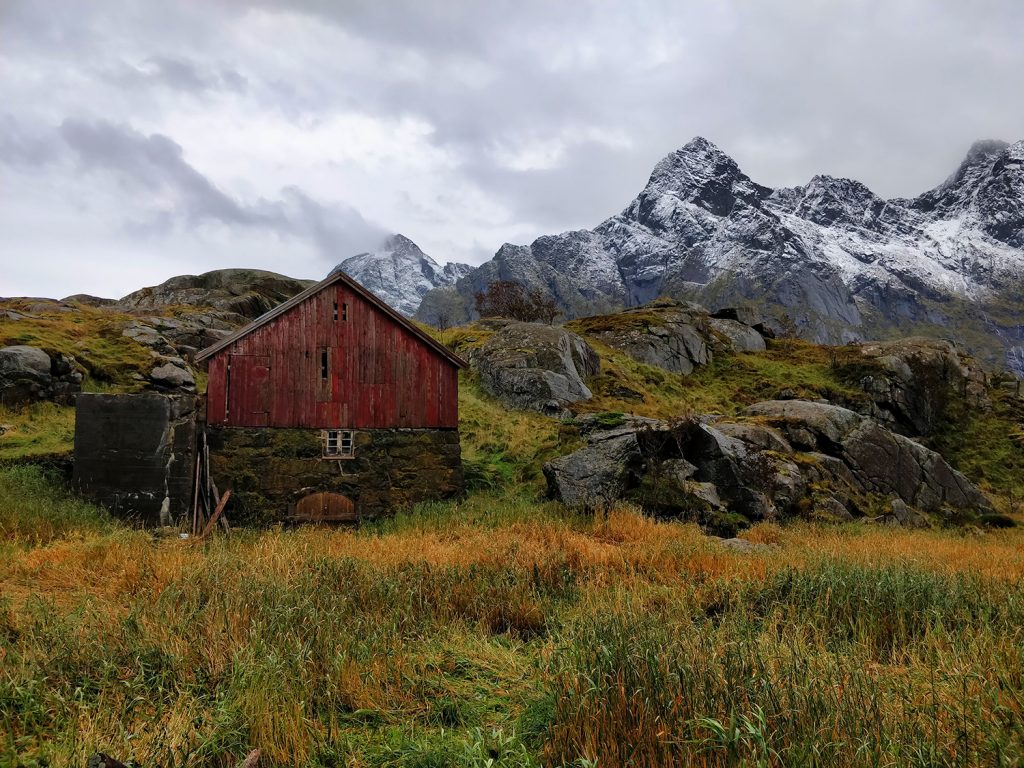 The autumn colors, in combination with the red house and the sugar coated mountain are such a pleasing sight.

Already the final day of the tour. On day seven we were finally able to go to one of the beaches to shoot the beautiful patterns in the sand. The weather was good, the tide was right and there was almost no wind. In other words, conditions were fantastic. Apart from an occasional shower, it stayed dry but the rain further away caused some epic rainbows to appear! That was an added bonus to an already fantastic photo session. 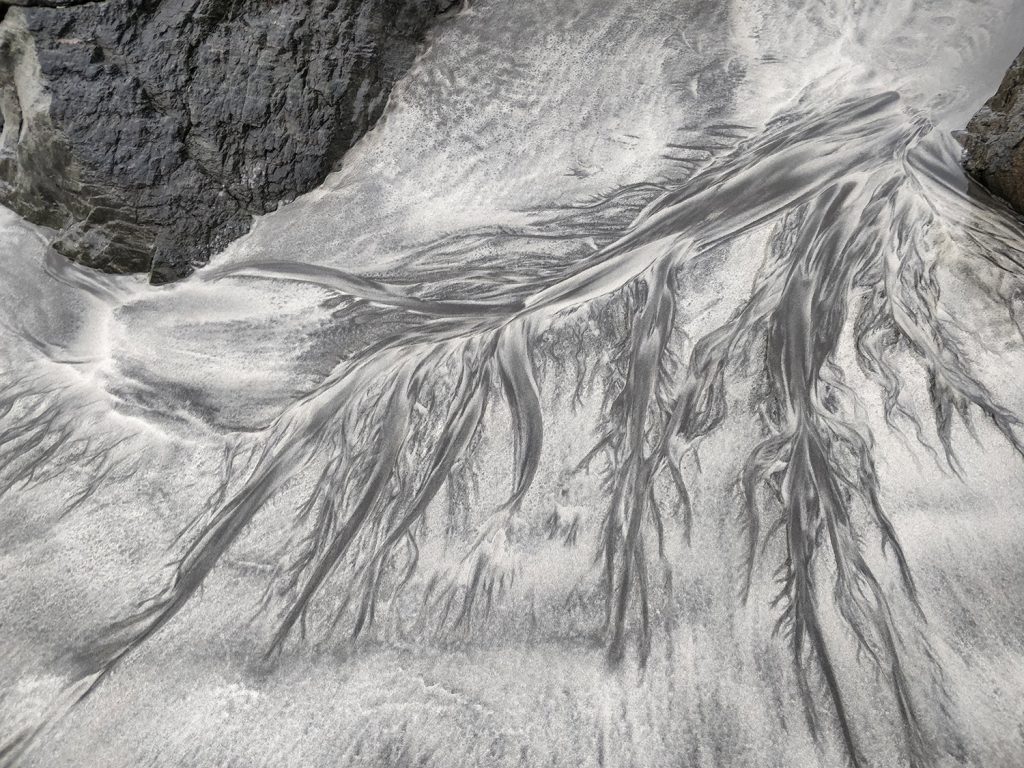 This beach offeres some of the most spectacular patters but conditions have to be right.

The tour went over so quick and although challenging at times, I could not have wished for better conditions. The only downside to this weather is the fact that we were not able to fully enjoy the aurora borealis. It was visible on the last night, but it was not a big show. We could see the partly clouded sky light up green but nothing special. Just after we returned home though, a coronal gap in the suns atmosphere sparked a big show that was visible on the Lofoten because the sky was clear that night. But hey, you can’t have it all right?! I’m really happy and proud of the images I have taken, and I’m really looking forward to the Lofoten 2019 Autumn tour.

Thanks a lot for reading
That’s it for this week’s article! I hope you’ve enjoyed this tour journal. If so, please feel free to share on social media! And, if you like my photography, please follow me on Instagram @harmenpiekema