Behind the Photo: Nobody leaves without Brinta

In the Behind the photo series, I want to go into more detail on why and how I took a particular photo. For this week, I’ve selected an image that I took last weekend. I came across this house when I was scouting for locations in April (image 1). It was a grey and windy day, but already I could see the potential for an amazing photograph. 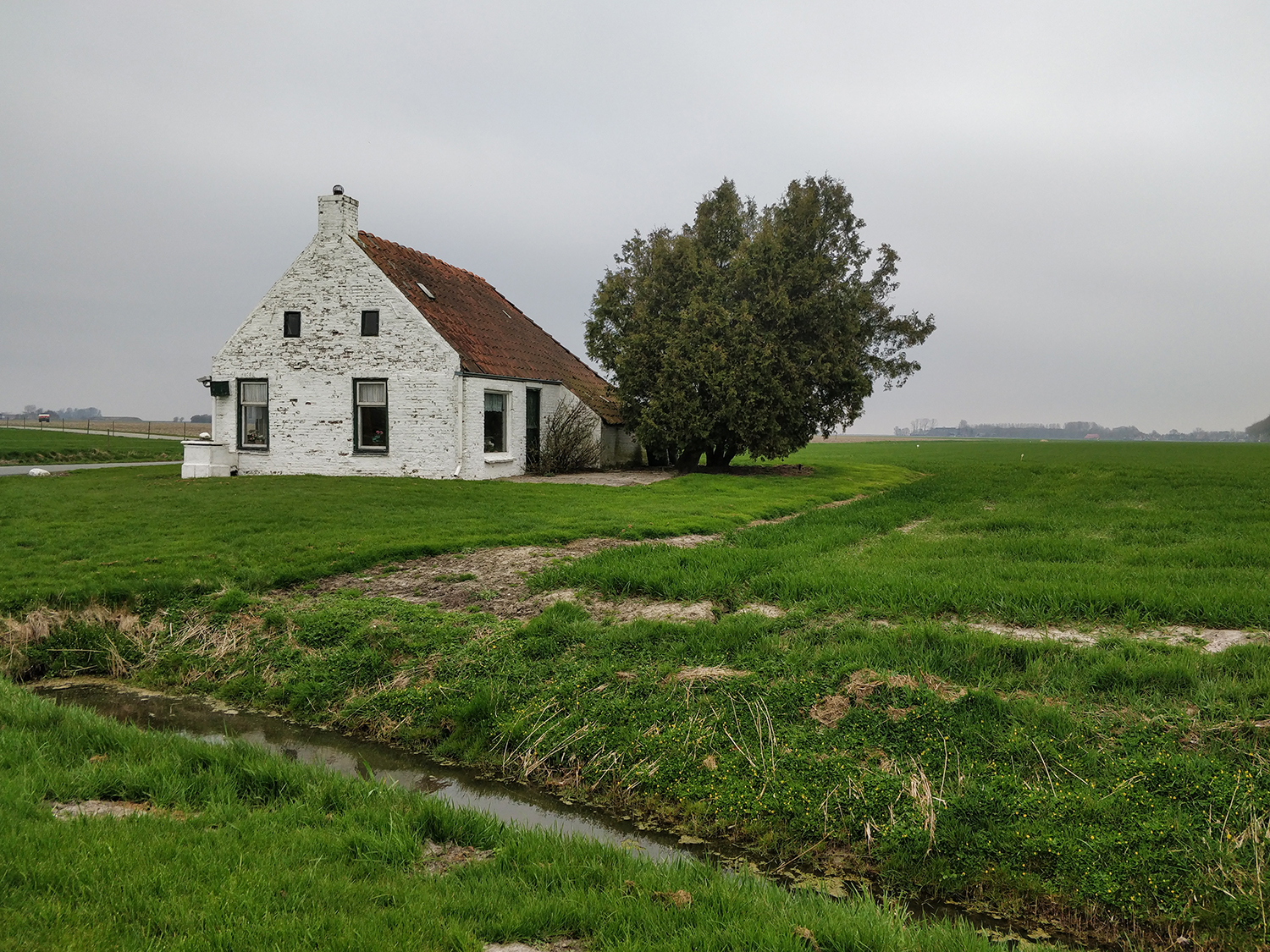 Image 1: It is easy to see that this well worn house has a lot of potential for a spectacular image. I love places like these. They offer so much atmosphere and drama.

Analyzing the location
In a situation like this, I always start with analyzing the location. What can I use to enhance my photograph, and what do I leave out. I often begin by determining where I will be standing. There is a farm on the left side, which means that I will take the image from that direction to make sure that it (or parts of it) won’t end up in my image. I also think that the house looks best from this angle.

Looking at the foreground, I encountered a problem though. There is a road that runs straight in front of the house and out of the frame, going from left to right. Normally, I love leading lines but this one is not constructive. In my opinion, it blocks the viewers eye, leading you away from the sky and the rest of the background. Therefore I needed to find a way to get rid of this road (well… at least in my photo 😛 ). 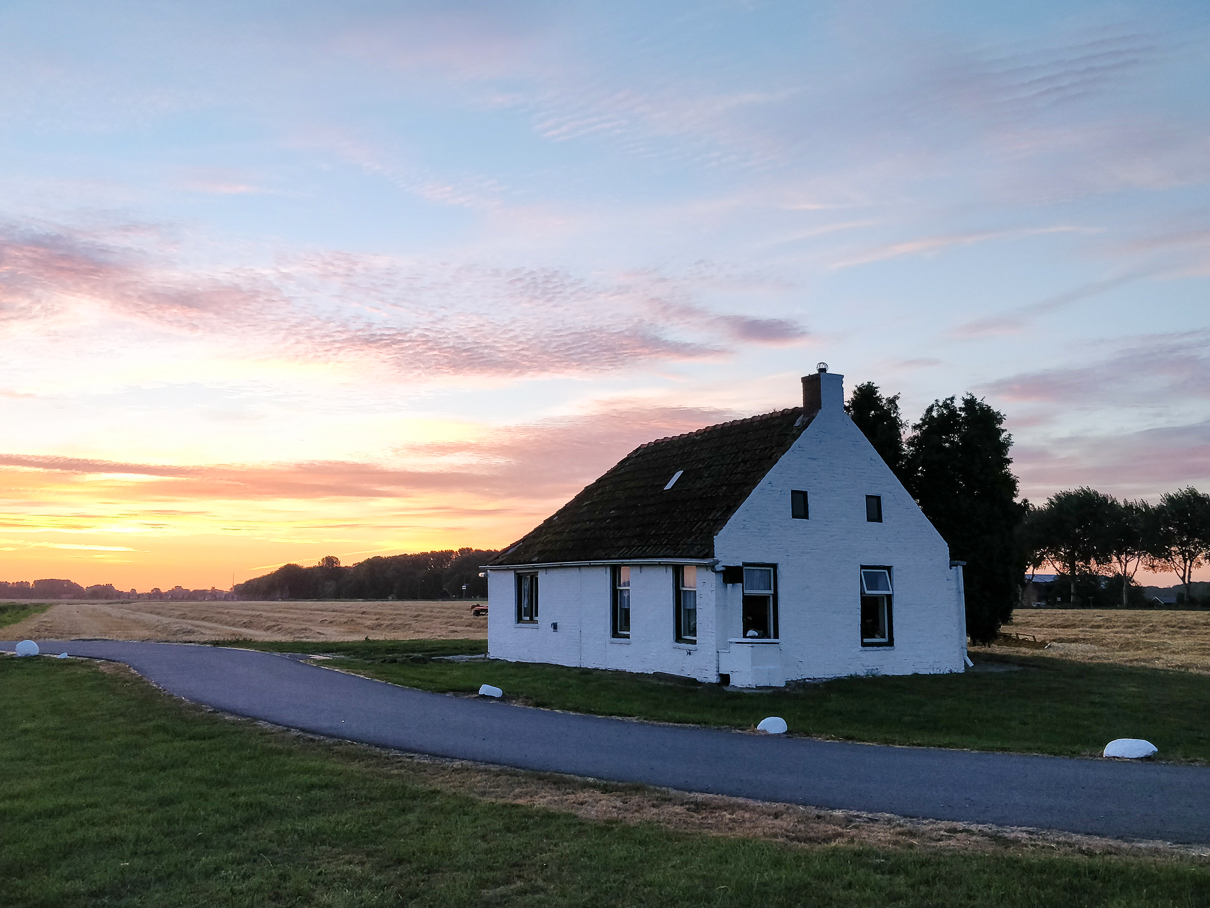 Image 1: As you can see, the road forms a distracting element that leads the eye away from the background.

Thanks to Google maps, I noticed that this area is used to grow wheat. To make sure that this is the case this year, I went on inspection a few weeks ago, and indeed, the field was full of golden wheat. This meant that my ‘road-problem’ was solved.

Placing the sun
In order to get a nice balance, I wanted the sun on the left side of the house. As you can see in image 2, when I found this location, the sun was still rising too much towards the right meaning that the house would block the sun. Using Photopills on my phone, I determined that the sun would rise towards the right during summer.

Image 1: Using an app called Photopills, I checked where the sun would rise and found that I had to wait for a few months before I could take this image. 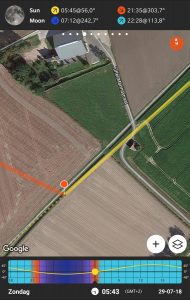 After waiting three months the sun was finally in the right place, and the wheat was in full bloom. Now it was time to pin-point the exact location from where I wanted to take the shot. Again, using Google Maps, I noticed a track next to the crops. I absolutely didn’t want to walk through the field because that would destroy the plants. Therefore, this track came as an awesome solution.

With the aid of Photopills planner function I made my plan. I more or less guessed how far I had to walk backwards on the track before my whole foreground would be covered by wheat and placed my marker accordingly. I did this by making a rough estimate of the angle at which I was looking towards the house. By changing the date, I could visualize the path of the sun and thus determine the best timeframe for my shot.

As a final element I wanted some clouds in the sky, to add interest as well as to soften the light a bit. Because there was an ongoing heatwave, the sky had been cloudless for quite a while now. And because of the heat, they were starting to harvest the crops. This ment time was running out! Luckily the weather forecast showed that there would be clouds in the weekend! With this in mind I set my planning for the 29th of July.

On location
At 4.30 am my alarm rings and it is time to hit the road (after fixing some coffee of course). I hate getting out of bed early, but I love to drive around and be outside before everybody else. It’s always really special to see and listen to the world waking up. After I parked the car, I walked towards the house. It is 20 minutes before sunrise so there are some beautiful colors in the sky. There is still some time left because for my shot I needed the sun to be a bit higher in the sky. After making sure there is no stunning image to be had with the colorful sky and just the house, it is time to walk towards my pin pointed spot on track.

To my delight, I see that the road has disappeared behind the wheat and that the whole bottom 2/3 of my frame is covered. I set-up my gear and slide in a 3 stops NiSi Hard Edge Gradual ND filter to balance the foreground with the sky. While the sun is rising, the colors are shifting from deep red to golden. This is the moment I’ve waited for and now it is time to take the image and enjoy the moment. What unfolds in front of me is a true spectacle and I feel really stoked that my plan worked out this way! 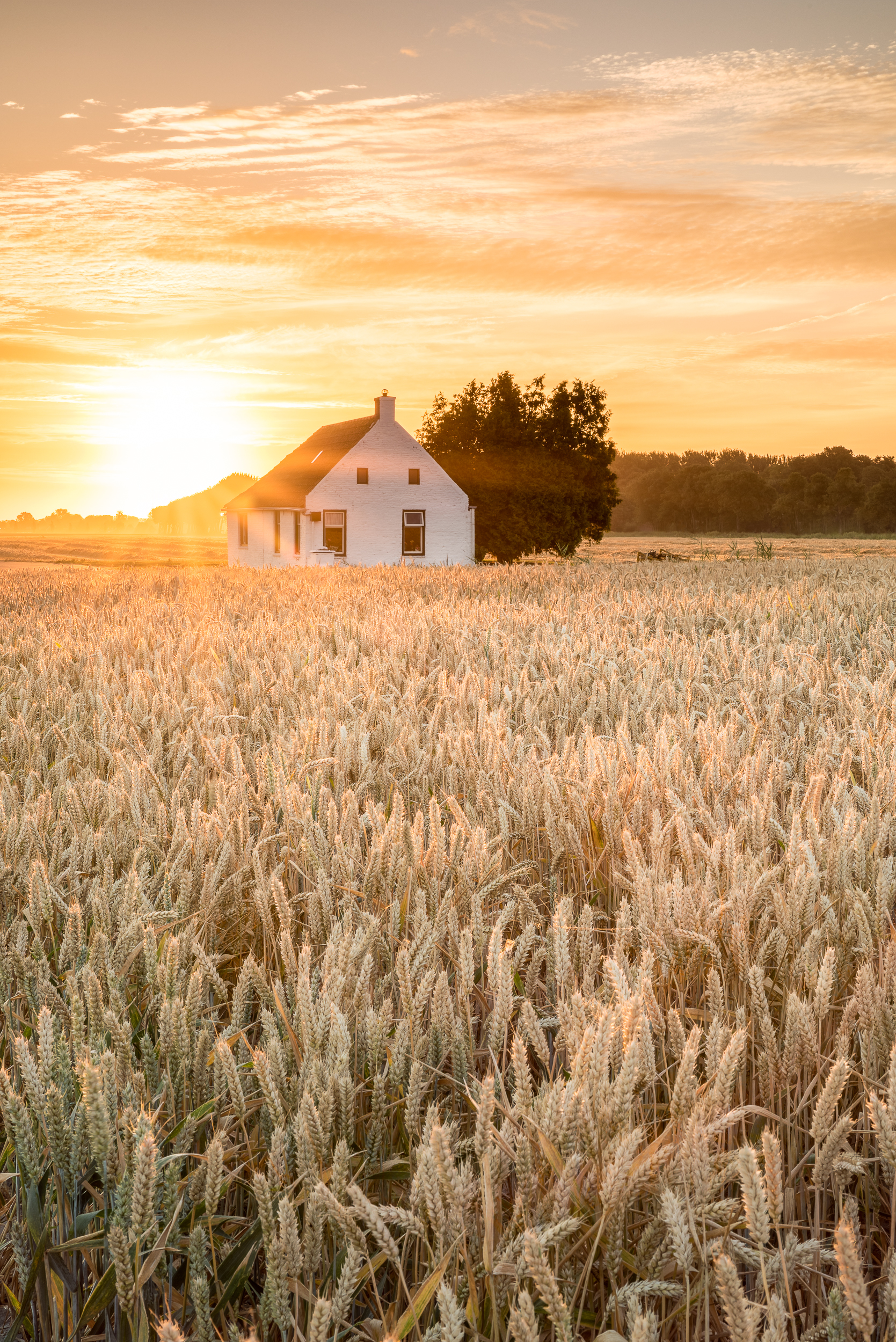 Brinta
One final thing I would like to mention about this photo is something I learned after posting it on Instagram. One of my followers mentioned that this house is called the “Brinta-house” because it had been on the Brinta box during the 1980’s. I think this is really cool! Brinta is a certain type of breakfast made out of grained wheat which you eat with milk. This breakfast is known to a lot of Dutch people. Especially the ones that are a bit older. Back in the days, most people, including my parents, used to eat this as breakfast. Even I did (with a lot of sugar). 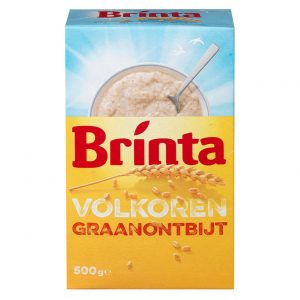 The company was founded at the end of the second world war (1944) in Groningen (the province where I live). The name Brinta stands for BReakfast INstant TArwe (Dutch for wheat) as a little ‘thank you’ to our liberators in the Second World War: the Americans and the English. Later the company was sold to Heinz and they moved to a different province but it is still quite a big brand in breakfast products and the original Brinta is still available. Unfortunately, I could’t find the old packaging so I added the recent one to give you an idea of what a bowl of Brinta looks like. I didn’t know this when I took the photo but I think the story fits rather well.

That’s it for this week’s article! Thanks a lot for reading! I hope you’ve enjoyed it! If so, feel free to share on social media! And, if you like my photography, please follow me on Instagram @harmenpiekema