As some of you might know (or have seen on Instagram), I’m on the Lofoten islands which lies in Norway and well within the Arctic circle. I’ll be here for five weeks. So far I’ve posted My first week in the Arctic, and my second story Arctic Adventures. This third post is going to be a ‘Behind the photo’ post. This might actually my best day so far!! What an experience this was!

In the Behind the photo series, I want to go into more detail on why and how I took a particular photo. In this particular post I won’t be talking technical, but about what was going on around me, and in my head.

It was only the second day of clear skies and sun after a prolonged period of  bad weather, and I was up for a nice long hike with a sunset photo session to top it all off. As I was preparing for this, I noticed the birds were particularly restless.  Circling above the bay and harbor, they seemed looking for something. I’d seen them doing that before but not in those great numbers. 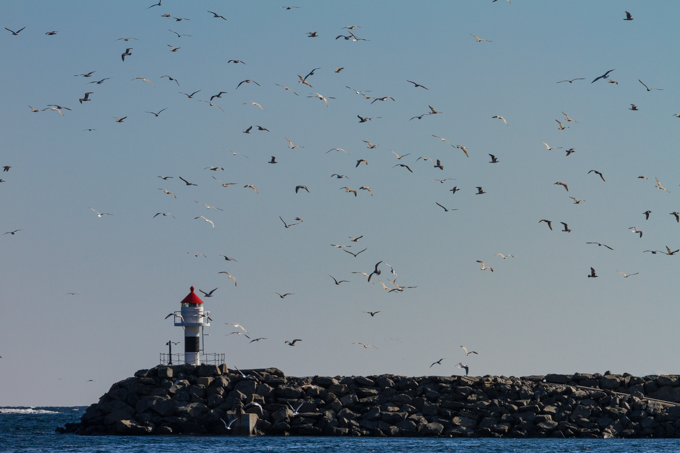 The guesthouse has the bay as its backyard so I walk outside to overlook the water for a while, but find nothing of interest. Driving out of Reine and along the coast towards Sakrisøy, I keep scanning the waters, I feel something is going on, there’s a great possibility for killerwhales to arrive, because they’d been spotted the day before in the vicinity of Reine. They always visit Reine and Reinefjord chasing herring.

As I’m nearing the first bridge, I suddenly spot a large fin entering the harbor and I know this is going to be an epic day!! There they are!! KILLLERWHALES!!! 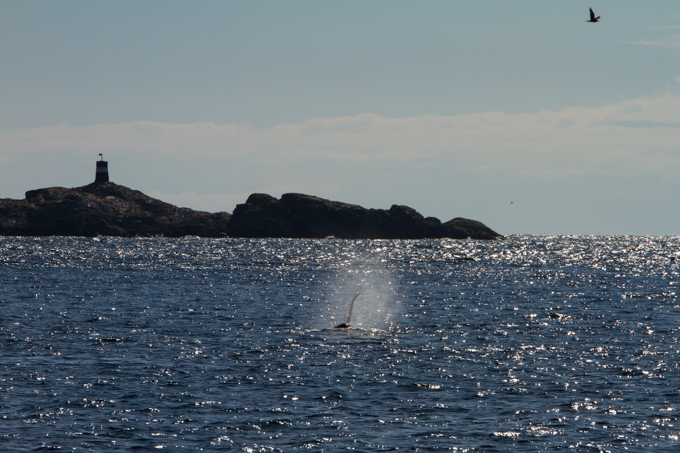 I drop the car and literally sprint towards the water, I crawl underneath a rack of smelly codheads and climb the rocks to get as close to the water as possible.

I’m close to the bridge and it seems that they are heading there too! This is the first time I see killerwhales, I’m overly excited and filled with joy, and now they are just a few meters away from me! How can it get any better than this! From time to time my 70-200 mm lens is even to large to fit them into the frame. 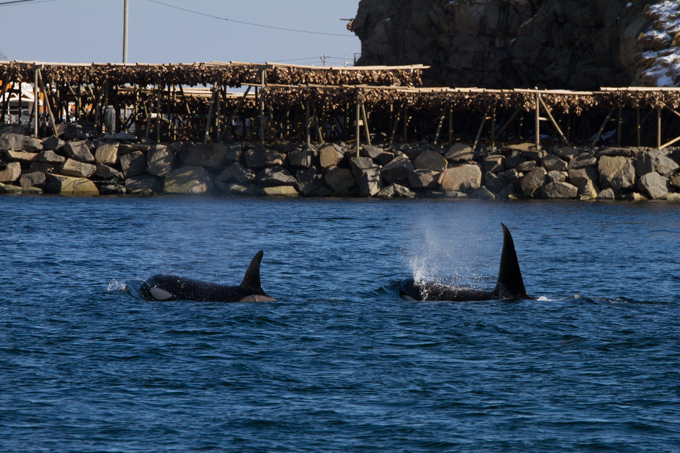 Because they are this close, I can easily observe them and notice a few small ones, they are not pink anymore which means they are probably older than one year. They look like cute black and white sausages 🙂  The whole family joins in the feast, which unfolds in front of me. Now and then they pop their heads above the water and whack the surface with their tails. The sound this makes is epic and it is used to scare the herring and keep them packed together.

It is obvious that a spectacle like this does not go unnoticed, and soon the whole E10 is filled with spectators, a few boats enter the bay and more and more birds arrive at the scene. The normally peaceful Reine area is now a scene of action. Because the killerwhales have moved deeper into the bay and a bit further away from me, I jump in my car and move to a different spot next to the E10. 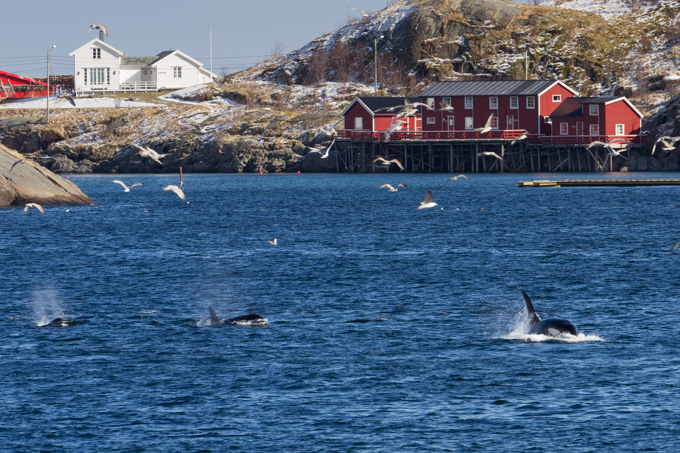 Now I’m overlooking the bay from a bit further away and observe the killerwhales behavior. I also start to pay a bit more attention to the birds, there are so manny of them. Off course all types of gull available, crows and raven, and white-tailed sea eagles. 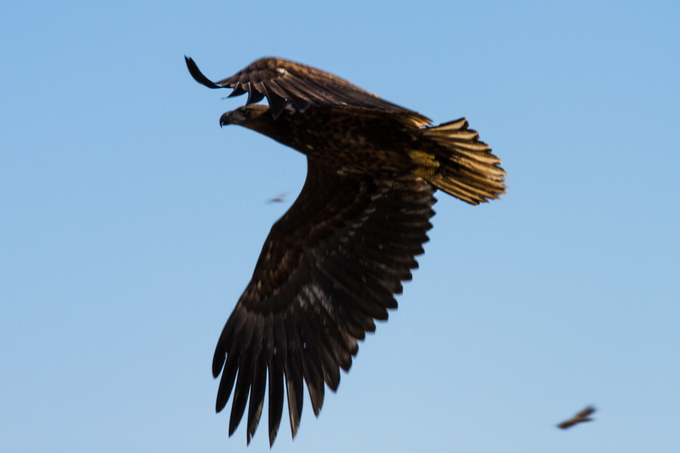 I’ve never seen that many sea eagles so close to each other, I count eight, and of course it doesn’t take long before a fight occurs. And it is happening all in front of me! Sick!!! 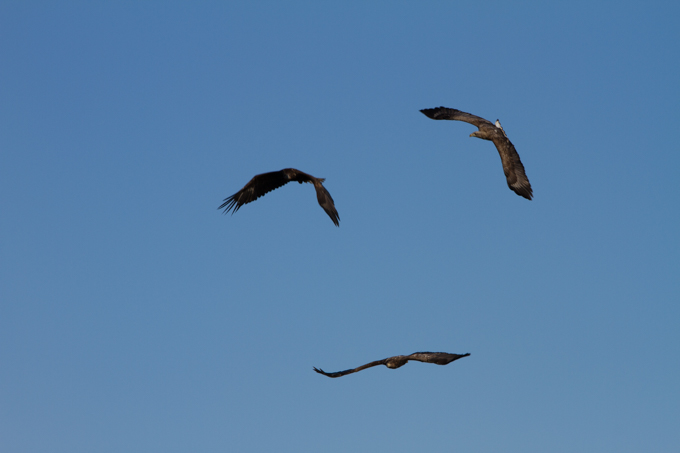 These three got into a fight after one had caught a fish.

After a few hours the commotion seems to die of a bit and I decide to move to the pier. This is where the killerwhales had entered and where they will possibly go when the leave again (if not entering the Reinefjord). I climb the pier and head for the end and there, just three meters from where I stand, surfaces a large male (which you can tell by their dorsal fin, males have a larger fin than females). 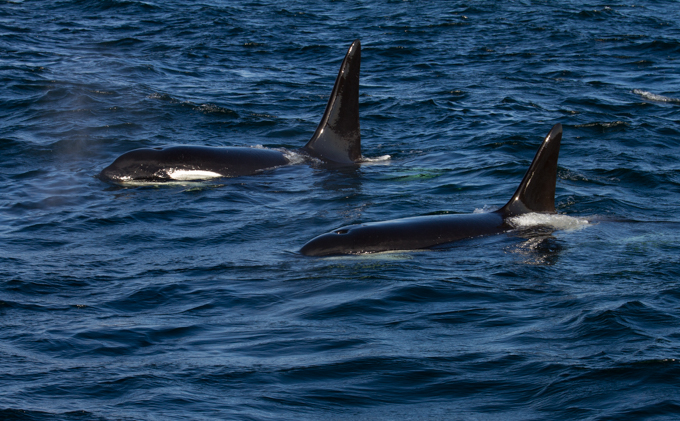 There are two adult orcas patrolling the mouth of the bay, probably to keep the herring from fleeing to open sea. They avoid using much energy and are mostly floating. It looks really cool!

Something I’d been noticing all day is that now and then the orcas surface the water with their heads, as if they are looking for something above the surface. It doesn’t look like they are feeding at that moment. They really take their time doing this. It looks fantastic as you can see their beautiful eyes and patterns. 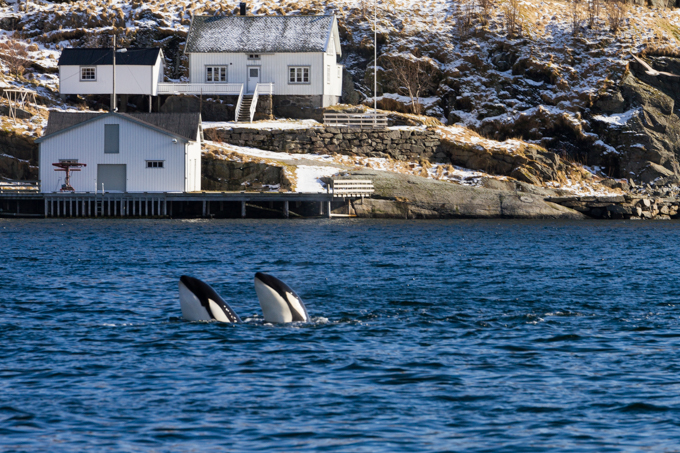 One thing I did not mention before is that there is an evil cold wind that has been with us all day and now, after more than four hours it starts getting its toll on my body. But I don’t care. This is too epic to walk away from. I get my thicker gloves from the car, ignore the numbness and continue observing and photographing.

I see two of the adults popping up again and as I aim my camera, I see one of them moving higher out of the water. I can hear the crowd roaring behind me. There was no time to focus so I hope for the best. I take a look at my screen and let out a roar myself. The timing is perfect. I could not have wished for more! 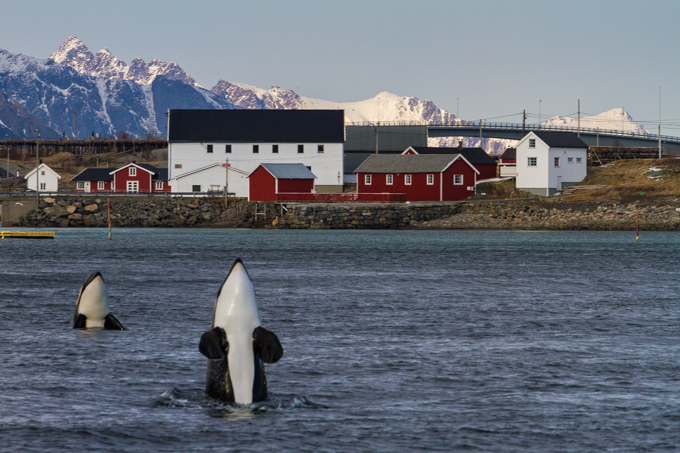 After this, I’m so delighted (I already was, trust me, but after this photo even more), I’m not really photographing anymore but just take everything in. I stay at this spot until they all get together to leave the bay again. After more than 5 hours I’m frozen but super happy!! As the swim out of the bay, one of them whacks its tail on the water as if to say goodbye (corny I know) and then they’re gone. 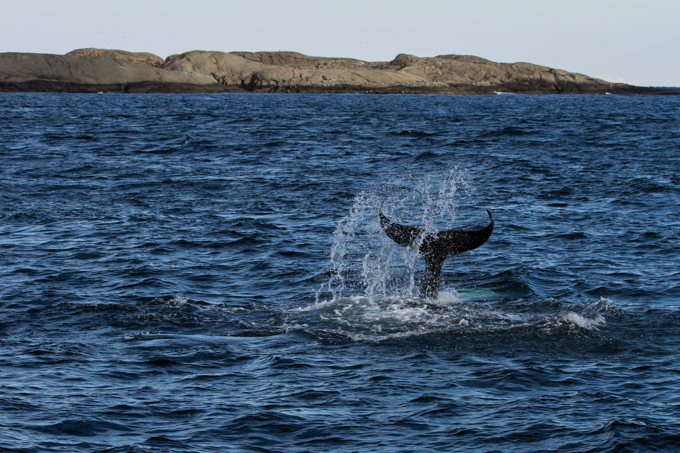 Of course these animals have straight dorsal fins, and are not collapsed under stress as you see with animals in captivity. That is why captivity sucks and you should never ever buy a ticket! If you feel inspired by this story go find a guide or company that does whale tours! Orca’s (and other cetaceans) don’t belong in a tank, they swim up to 200 km’s a day, live in families and need space! If you buy a ticket you promote animal abuse. Empty the tanks!!!

This was my story for this week. If want to know what I’m up to from a day to day base, follow me on Instagram where I’ll use the Instagram stories to make short videos of what I’m doing and where I am. There are more great stories to come, so make sure to check once in a while!! Thanks for reading and feel free to share this post with your friends!!