One of the most (or possibly THE most) beautiful place I’ve ever been to is without a doubt Jökulsárlón. This large glacier lagoon with ice in all shapes and sizes is mindblowing. If you’ve read Try not to get frustrated you know how I felt earlier this day and that I was afraid the fog would obscure all the beauty of this landscape. I couldn’t have been more wrong!

WIKI: When the first settlers arrived in Iceland around AD 870, the edge of the tongue of Breiðamerkurjökull glacier was about 20 kilometres further north than its present location. During the little ice age between 1600 and 1900, the glacier had grown by up to about 1 kilometre from the coast. When temperatures rose between 1920 and 1965, the Breiðamerkurjökull glacier tongue rapidly melted, creating a lagoon in its wake. The lake is about 248 meters deep. In 1975, the lake was about 8 km2 and now it’s around 18 km2. If global warming continues at this rate, one day the bridge will become too short to cross the river and the lagoon will become a fjord.

We follow the river Jökulsá á Breiðamerkursandi upstream This river is with 500 meters, Iceland’s shortest river. However short, this river is impressive. Because of the tides and the narrow opening the water flows super fast (average flow of 250-300 m³/s) and falling in would be really bad. The water is super blue and filled with large pieces of ice (some are the size of houses), waiting to be molten enough to pass the bridge without destroying it (they’ve made a underwater barrier for this purpose). This water must be really cold but we see a lot of ducks (with a pink chest, really pretty) and some seals swimming around. It is still super foggy but after seeing just the tip of the iceberg (:-P) we are excited about what awaits us.

As with all touristic hotspots in Iceland, the area closest to the parking is littered with people. Which is understandable because the ice formations look insane! This is the place where the lagoon flows into the river and thus where the barrier is. Because of this barrier all large blocks of ice remain here until they are small enough to float away. Which is clearly illustrated by Google maps (on the way back I took a photo of this beautiful spot but at this moment it was still too foggy).

The edge of the fog

Because we want to explore the rest of the lagoon (and we don’t like crowds), we continue alongside the edge of the lagoon. There are moments when the mist seems to disappear but when it’s almost gone, it reappears again. But then, we reach the edge of the fog and thereafter it’s mostly gone, what remains adds to the drama of the landscape. On one side the sun lights the fog and on the other side we see the large icecap Vatnajökull in all its glory. There is no wind, so the lake acts like a giant mirror. It is absolutely breath taking! 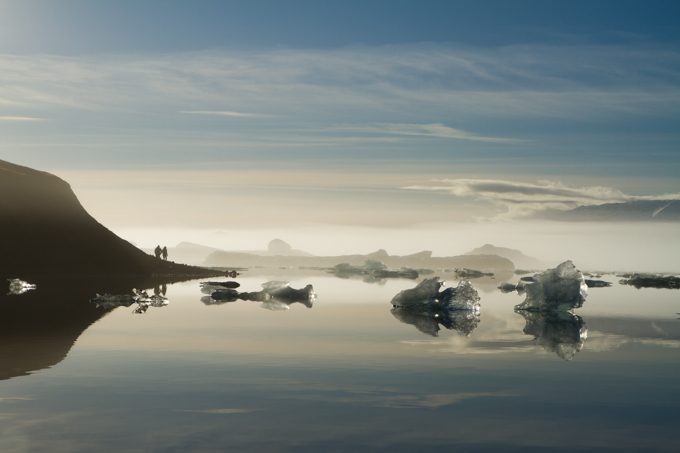 We continue our journey towards the glacier and enjoy the silence. Almost no tourists venture this far away from the carpark (probably because they are a: lazy, b: crossing of lists, c: afraid to get lost, d: think all the beauty is there e: like crowds f: I don’t care why). Because of this, it is really quiet and serene. Now and than you can hear the cracking and breaking of ice in the distance. When the larger pieces of ice hit the water it makes an impressive sound. The air here is super clean and with no wind and a lot of sun it’s almost to hot in our (fake) down jackets. 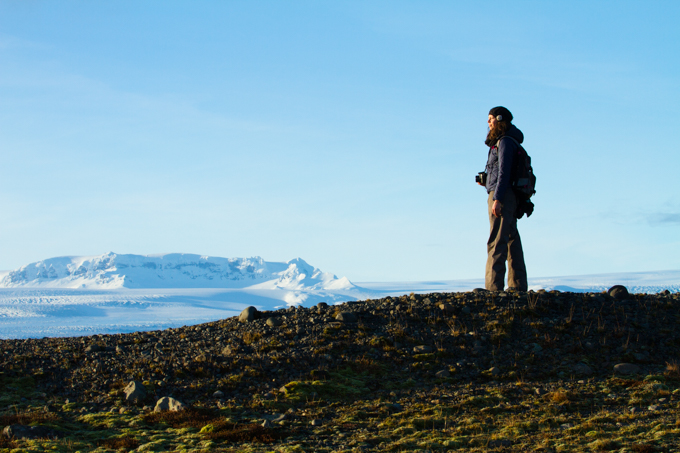 Joke enjoys the sun as we climb uphill

From a higher vantage point

We divert from the waters’ edge and cross a few hills, not only is this a shortcut, it provides us with a beautiful view from above. Everywhere you look there are pieces of ice. Some super large and blue, and others really small and glassy. 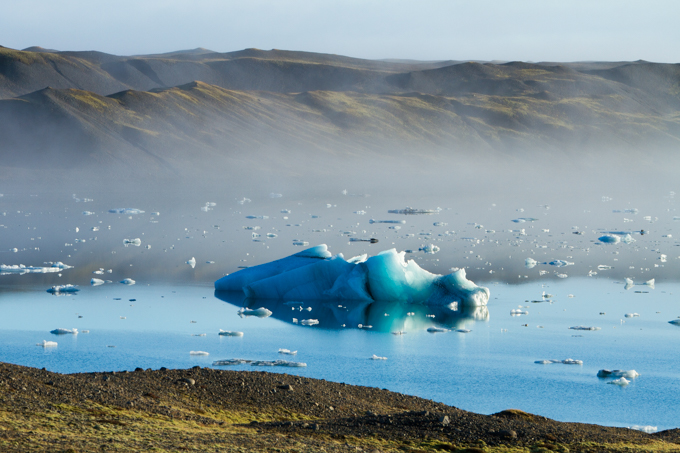 There are so many shapes its easy to let your imagination go crazy. 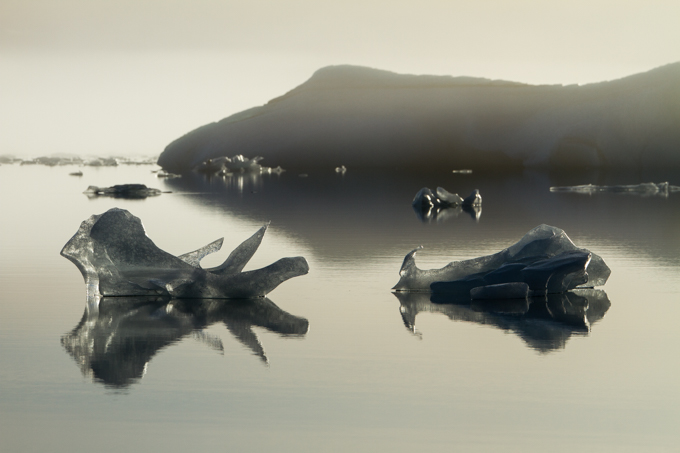 If we could walk on water, it wouldn’t be far to the glacier anymore, but there is a large lagoon-arm that lies in our way. Based on the time needed to walk this far, the almost setting sun and the fact that we’re not sure whether or not we’ll be able cross the river that connects to the lagoon. We decide that this is the perfect place to turn around (after taking a 5 image-panoramic shot, which I’ll publish in the nearby future). 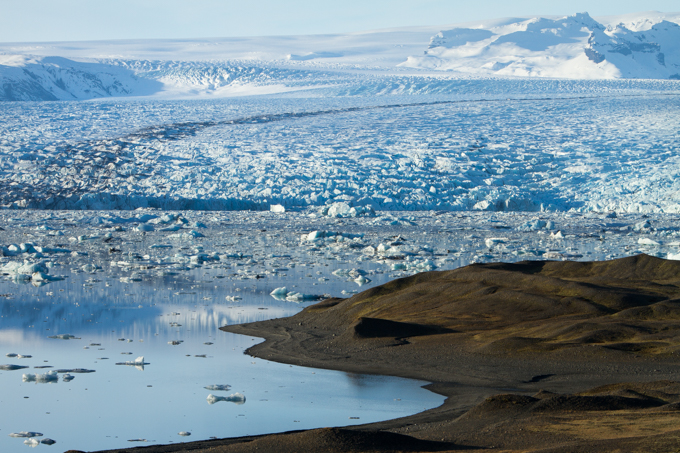 As you can see, the glacier is not that far away anymore…

Back to the crowds

While the sun is slowly setting we make our journey back. The sunset itself is not that spectacular but the orange and pink colors give a really soft touch to the landscape. When the sun is gone, large clouds take over and we know that we’ve been really lucky with this insane day! At first all the mist, frustration (for me at least, not for Joke) and satisfaction at Diamond beach and now the intense beauty and serenity at the lagoon. What a day.

As we move back into the crowds (even more than earlier that day, possibly to photograph the sunset), I snap one last picture, this is the image taken by most people (I guess) but I simply like the clouds and the dramatic ice formations. 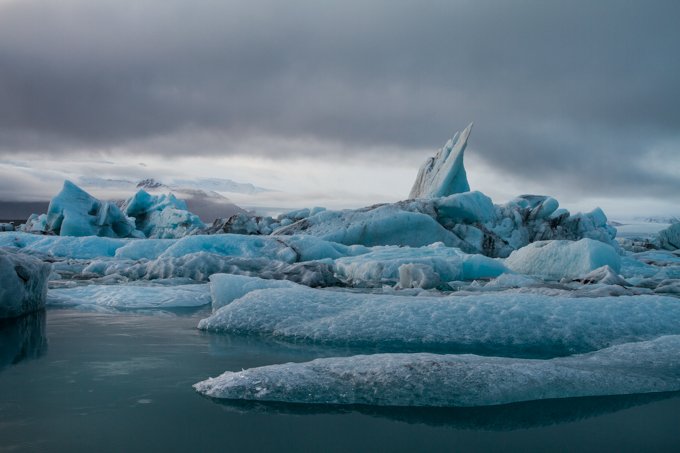 Just before we walk back to the car, we spot two large gray seals diving and swimming around looking for fish in the lagoon. For us this tops of the already perfect visit to this amazing place! We will definitely be back for more!!