One of the main reasons that you should visit Iceland during winter is to see the Aurora Borealis, or Northern light. The aurora happens when electrical charged particles from solar winds collide with the Earth’s atmosphere. When they do so, they loose energy causing light of varying color and complexity to appear in the sky. The stronger the solar wind, the stronger the aurora. This beautiful phenomenon can best be seen in the high northern regions, among which is Iceland. Of course, to see this you need clear skies. And this can be quite challenging in this part of the world.

First of all you need a cloudless sky! The best way to predict cloud coverage is to use real time data. Iceland Met Office provides this data. It is plotted against a map which can be viewed in steps of one hour, and is really useful for planning where to go. 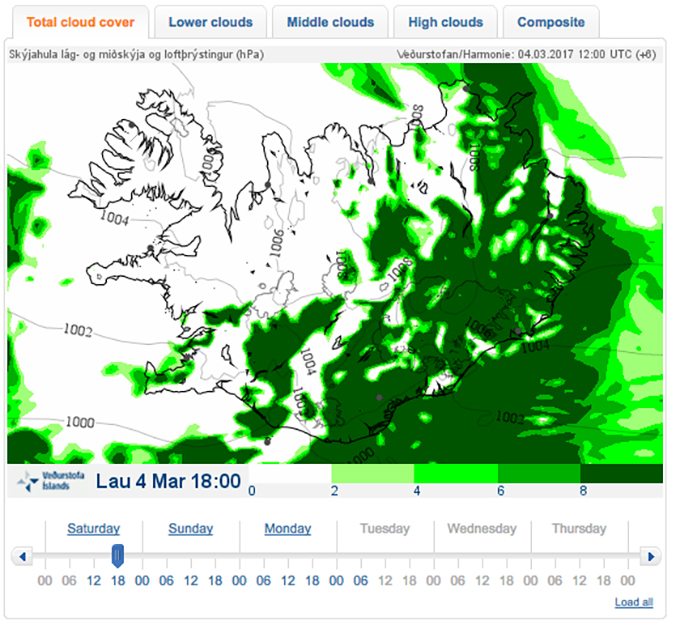 The green spots are clouds, you want large white spots!

Clear skies alone are not enough! It sounds obvious but to see the Aurora there needs to be sufficient solar activity for it to reach Iceland. For this, the most important number you need to remember is the Kp-index. It is a scale of numbers between 0 and 9 and is known as the planetary index. Using this map, it is easy to determine what Kp number you need for the aurora to be visible on your location. So basically, the only thing you need to do is to remember the Kp number corresponding to you location. When looking at the forecast you now know what number you need. When the Kp number is the same or higher than that of you location, chances are high that you will actually see the aurora. 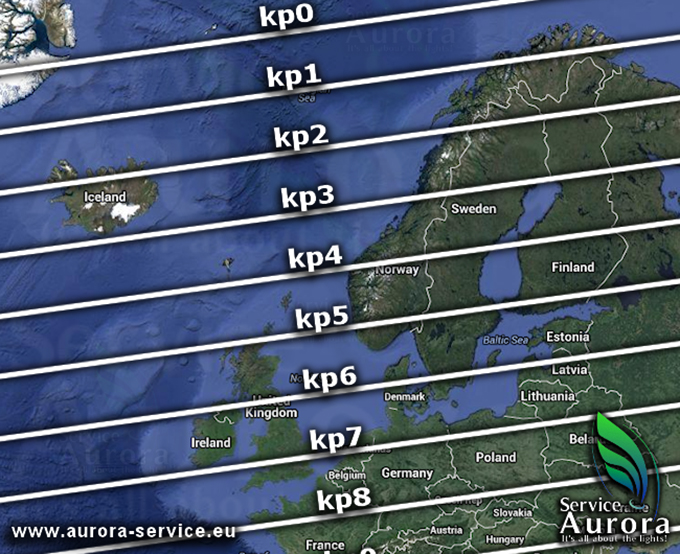 This image can be used as a guide to determine the Kp number you need. Nothing is definite with the aurora so don’t be disappointed when you don’t see it that night. Go out again the next time! The lines on the image indicate where the aurora should be visible from, but it doesn’t mean the aurora will be directly overhead. Always start looking at the Northern Horizon.

Okay, everything looks right, predictions look promising and the sky is clear. What’s next? Now you need to find a place that’s dark and with an unobscured view to the north. Finding a dark place in Iceland is easy because most of the countryside is completely dark. But of course to make an interesting photograph you need some foreground interest and some nice objects to built your composition with. When you’re planning on just watching the aurora, don’t worry about this and just go for the darkest flat spot you can find. I however, wanted to photograph the aurora and I knew what I wanted. We we’re in the western part of Iceland because cloud coverage predictions for this area looked promising (and we visited some other beautiful spots in this area as well).

After seeing a beautiful sunset turning the landscape in hues of orange, red and pink, we got energized! After a more or less overcast day, it seemed like the clouds finally gave way to make place for a clear sky. While driving to the location, the sky became much clearer, now we just had to wait till it got dark. The location that I had in mind for the photo was on the edge of the city Akranes. Based on what I mentioned before this seems like a bad choice. Cities give a lot of light pollution and in this case, the northern sky was partly obscured by large buildings.

The reason that I wanted to go to this place however, is because there are two lighthouses that could make for a beautiful image. I knew I wanted to photograph the old lighthouse (1918) that sits on the rough an textured cliff very close to the sea. This is also the one that lies more in the dark and is not in function any more so there is less light to disturb you from the aurora. For the last few hours I’d been checking the forecast all the time and I knew we would see something. The Kp number was 2.33 – 3, not super strong but enough to see the aurora at this location.

Learn to work in the dark

At the car park there were more photographers but I was really surprised that I was the only one photographing the old lighthouse. Everybody else clustered around the other lighthouse. One guy was using a really bright headlight all the time, casting light on everything around, something you really should avoid doing! First of all, it is annoying for others but more importantly, your eyes adjust to the darkness but this takes time. Every time you use a bright light, your eyes need to re-adjust again. The best thing is to know your camera and gear by heart so you don’t need to use a light, or if that doesn’t work for you can use a soft red light. Also, when checking your phone for the aurora forecast, dimm your screen as much as possible (there are even apps for this), this is really important.

After having dinner and returning to the carpark again, it is finally fully dark. The night sky is beautiful and stars shine bright! To my delight, part of the milky way is in line with lighthouse. We climb across the rocks and boulders to reach the lighthouse. This needs to be done with care, because there are large seawater filled gaps between them. Others are slippery and on some there is seaweed. Here it seems a lot darker than at the carpark. As I setup my tripod (a little challenging with all those rocks and holes) and prepare everything, a faint band of light starts to appear behind the lighthouse. It is really soft and colorless at first. To confirm that this is the aurora, I take a 20 second test-shot and indeed I see a small green ‘mist’. It moves really slowly and if your not paying close attention, it can easily be mistaken for a band of mist close to the horizon. After a while this band gets brighter and lines and patterns start to appear. It becomes easier to distinguish the green color and also some red is observed. With my camera fully set I take a shot! Yeah!! My first aurora! 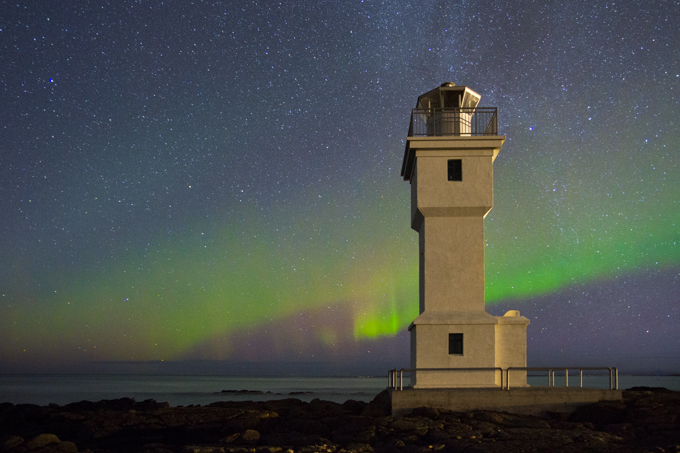 I take more shots, but also take time to simply witness and enjoy being at this beautiful location (don’t forget this, it is really inspiring to just observe the beauty). Although the carpark is close by, we feel quite isolated and alone. The smell and sound of the sea adds to this experience and we feel grateful that we are here. After a while the aurora activity becomes less intens and the band starts to get really faint again. Also, we observe that it has slightly shifted and lies more behind the city. We decide that it is time to leave this place and head for the car. I take some pictures at the other lighthouse but for me, this doesn’t work that well because of all the yellow city light that is being casted on this lighthouse.

There was more to come!

As we are driving out of the city and leave the last light posts behind, we enter the dark world that is the countryside of Iceland. The aurora that we saw at the lighthouse was indeed just a small part. This band stretches all the way across the horizon and is much brighter at its peak. Now it is even getting brighter and patterns start to appear. Looking for a composition while driving in the dark and staring at the aurora is hard (and dangerous). I find a spot next to the road and set up my gear. The aurora gives us an amazing show and I take an image. I miss some foreground interest but this is solved by a nearing car. His lights reveal just enough details for the foreground to become interesting. 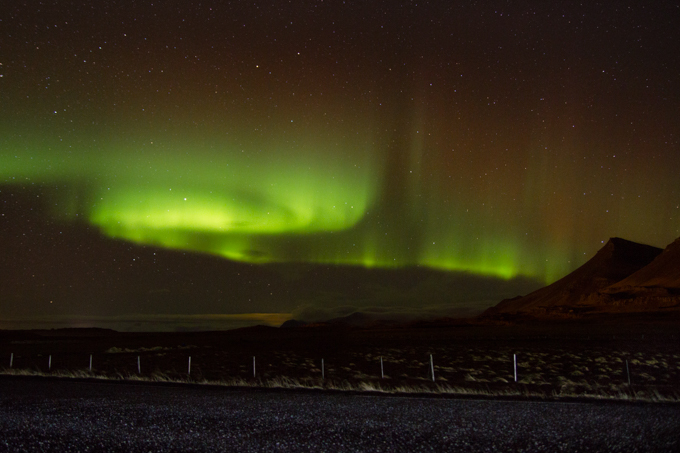 We keep on watching till it becomes faint again and then decide it is time to leave. We got still a few hours of driving in front of us. During this we see the aurora until we get to the clouded part of the country again. Driving through the night we feel happy to have witnessed this. It turned out that we were really lucky as well. During our stay this was the only night that we observed clear skies!