Try not to get frustrated!

One might think that with the right ingredients, a beautiful image automatically follows. If the landscape is pretty, the photo is pretty. But I can assure you, it is not that simple! Sometimes you have to work really hard to get what you had in mind, or even abandon that idea at all. And if you become frustrated, you go from bad to worse. With such a state of mind, it becomes impossible to get a pleasing result. This story is about what happend at Diamond Beach in Iceland.

According to the weather forecast it would be sunny with a clear sky in Jökulsárlón. This was the news we’d hoped for. We left early for the long trip eastwards. The whole route was amazing, the weather was beautiful and the landscape breathtaking. We neared the Svinafellsjökull, the smallest glacier tongue of the Vatnajökull (Icelands’ largest glacier) and the sky was deep blue (I’m sorry for the names, it’ll get even worse hahaha). 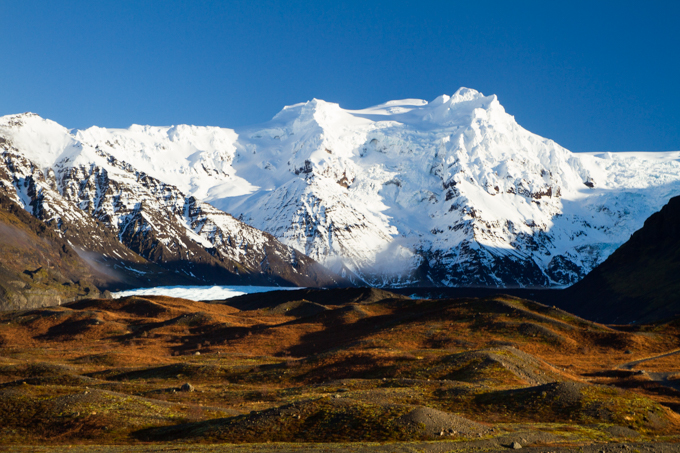 Oblivious to what lie ahead, we enjoyed the breathtaking landscape! As we passed the Hvannadalshnúkur (a large glacier tongue) and neared Jökulsárlón (I will write a separate blog about Jökulsárlón soon, because it is the prettiest place I’ve ever seen), we observed low hanging clouds that blocked our view. The clouds were not thick (in hight), we could still see the sun, but this was not what we had hoped for. I felt a bit disappointed and hoped that it would dissolve soon. I was afraid that with this weather the magic of the Jökulsárlón lagoon would remain hidden (I could not have been more wrong). As we crossed the bridge (from the west) and parked our car on the right side (at Diamond beach) we could hardly see the bridge and we couldn’t see the lagoon (on the left side) at all. 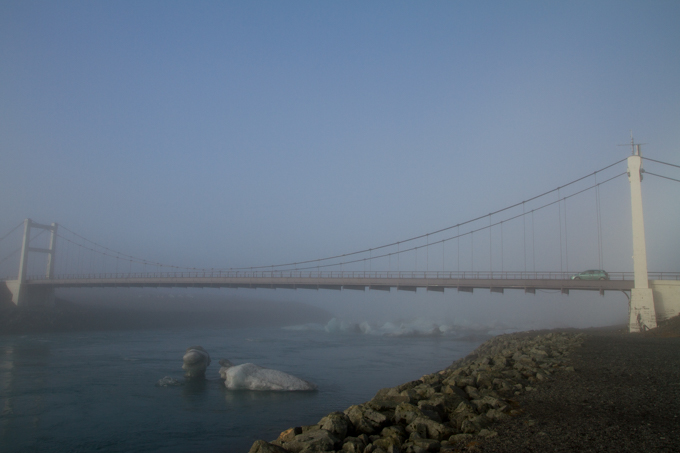 This image is just to illustrate the situation as we parked our car, banks of fog passing by all the time.

I had an image on my mind, so we set off to the beach. Diamond beach is an amazing and unique place. Ice from Jökulsárlón flows into the sea and then washes up at the beach. The black sand is littered with blocks of ice in different shapes and sizes. The downside of this place is that it can be really crowded, but all tourists cluster together close to the carpark (as they did everywhere in Iceland) but if you move a few hundred meter up the beach you will be on your own. It is worth it! It’s so beautiful and strange and the sound of the ice getting hit by the waves is awesome. Therefore you should be in a more quiet spot without all the annoying tourists that try to climb the blocks of ice to make selfies (ugh!).

I wanted to photograph a large piece of ice while the water was flowing back to sea on both sides (not the most original image… I know). This ment I had to use a longer exposure time. There are many pieces of ice in different shapes an sizes, so to find one suitable can be a challenge. Most are laying too close together, or are not clear, while others are to small and move with every wave. I wanted an isolated piece that was crystal clear and large enough to form an interesting image. After searching for a while I found one that I loved. 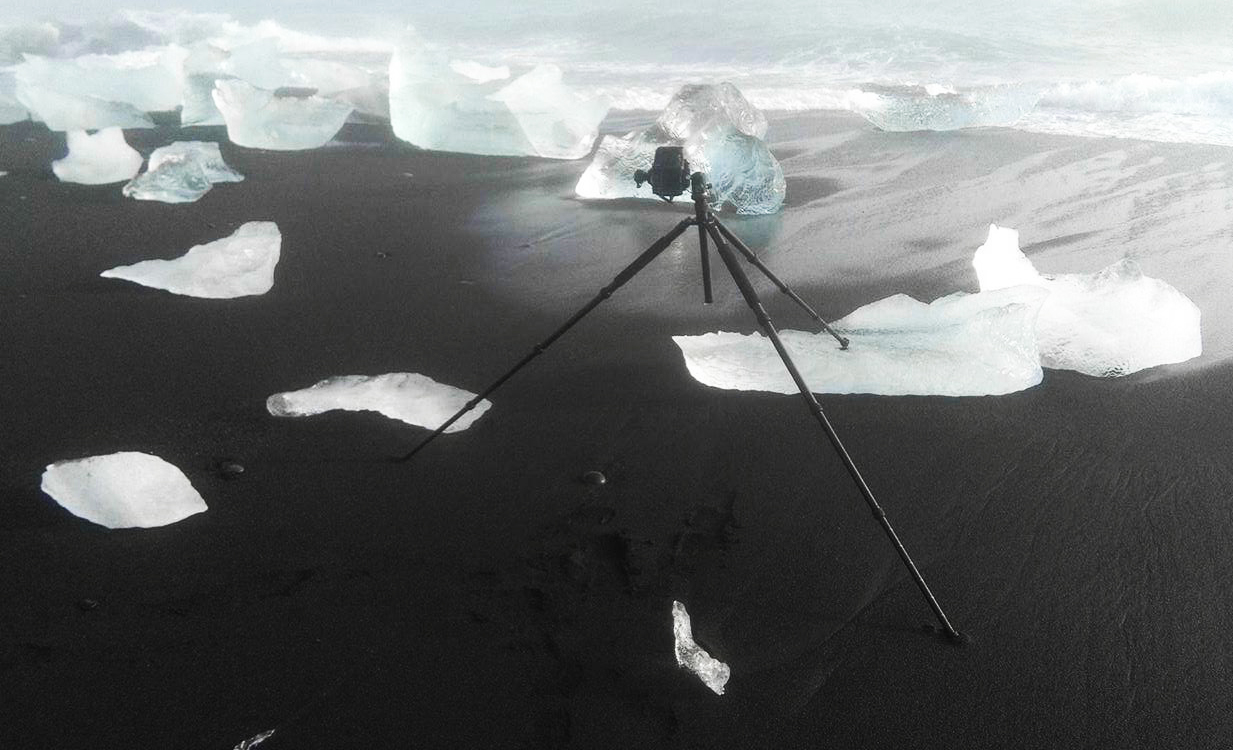 When photographing on the beach close to the waterline you can put old cd’s under the legs of your tripod to prevent it from sinking into the sand. Of course I forgot to those, so I placed on of the legs onto a piece of ice.

I got my gear ready and made the composition. But every time a wave reached the front leg of my tripod, it sank into the sand (I forgot to bring cd’s to prevent this from happening…). Lucky for me there was a large piece of ice and that worked quite well. Before taking a photo I waited for a wave to pass the ice and when it flowed back I pressed the shutter. Every photo I took was over- or under exposed. I even tried the Big Stopper, but also without satisfying results. This was really frustrating and it made me forget the beautiful surroundings. I was so obsessed with taking this one image, that I forgot about the beautiful landscape I was in and I didn’t enjoy what I was doing anymore. When this happens you can forget taking a good image, that is simply not going to happen with a mindset like this.

Outside the box (and against the ice)

I was about to put away the camera and just wander around for a while, when I decided to take a different approach (this was also partly thanks to my biggest coach (read: my girlfriend)). It was the exact same block of ice I was working on but without the restrictions I had put onto myself. Now I was walking freely without a tripod. This way I was able to take photos from a really low perspective. I only forgot one important thing… the ocean or to be more specific, the incoming waves. So when a larger set wave came, it came as a surprise(as a surfer I should’ve known, waves come in sets and now and then a larger set comes in). I took off and ran full force against another block of ice (and yes they are solid, they are 1000 years old pieces of glacier) before getting my feet washed by that same wave. I slammed my knee pretty hard (which was really painful actually) and my feet were soaking. And of course, before this had happened, nobody was around but now there were other people witnessing my stupidity. I felt ashamed, my knee was soar but at least I was enjoying my self again! And besides that, as this happend I had clicked the shutter, and took this image. 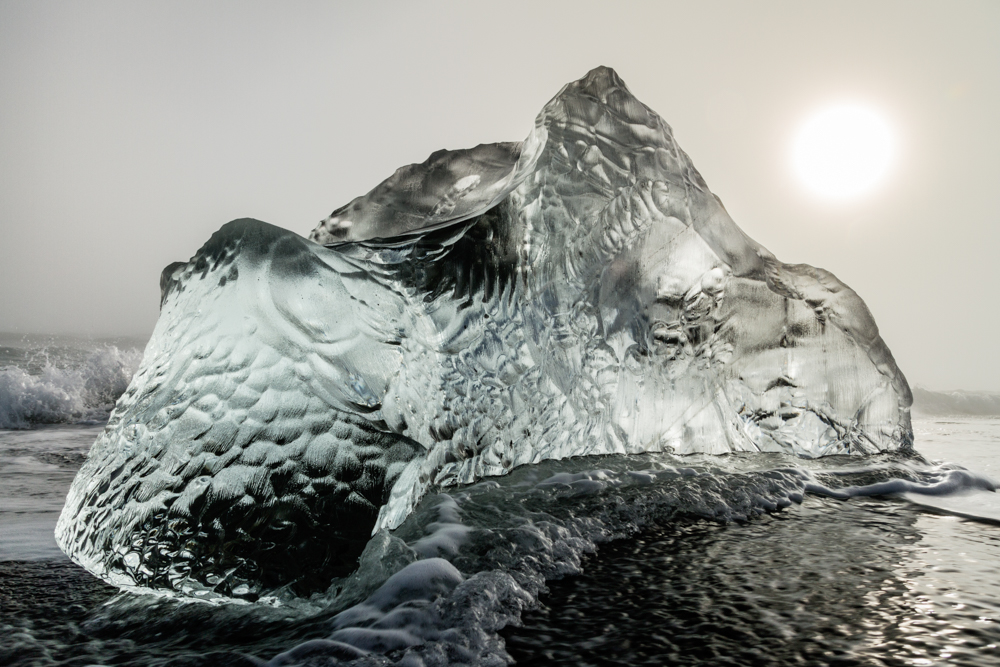 It was still foggy but instead of being annoying, it played a very important role in my photo! Without it the image would not be as good. The fog diffuses the light in a way that there are no real highlights on the surface of the ice and water. I would never have taken this photo had I stayed frustrated.

It only works if you enjoy what you are doing!